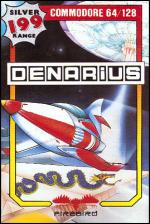 An exceptionally vile race known as the Rignalian (sic) have strategically positioned their fleet of sixteen space arks around our solar system in preparation for colonisation. Desperate for a saviour, mankind has turned to you, captain of the three-strong Denarius fighter fleet.

The action takes place over the sixteen vertically scrolling space arks. Denarius files over each ark, collecting the chlorine pods which cover their exteriors. Kamikaze Rignalian defence craft attack, and must be shot or dodged. Contact with alien craft reduces the Denarius fleet by one, with the new fighter starting at the beginning of the current ark.

In extreme emergencies, Denarius' single shield is activated by pressing the space bar. This only lasts for a few seconds, but during this time the ship remains invincible. Each fighter is equipped with one shield, with extras available along the way.

When Denarius has flown over a space ark, all the chlorine pods collected are turned into bonus points and a sub-game comes into operation.

Gas clouds scroll down the screen, each incorporating a small gap through which Denarius flies to gain bonus points. Denarius moves further and further up the screen until it hits a cloud, wherepon the sub-game ends and the next space ark scrolls into view.

When all sixteen space arks have been traversed, the mission starts all over again - this time with doubled defences.

I didn't enjoy playing this average vertically scrolling blaster. Going back to the beginning of a stage after losing a life is annoying and unnecessary, and in the end I only found myself enjoying the sub-game because it's simple and challenging.

At two pounds, an avid shoot-'em-up fan might be able to milk some enjoyment out of it, but avoid if you're getting bored with playing the same sort of game time and time again.

Just when you thought the vertically scrolling format has been milked dry, another attempt is made to squeeze a little more life from the genre. Denarius is polished, but it lacks two vital elements - excitement and novelty.

The lack of variety in the alien attack patterns is a detraction, and being put back to the beginning of an ark each time you die is extremely annoying.

The bonus game compensates a little, but in the end the action becomes repetitive. It's a shame there isn't more depth of gameplay to support the polished graphics and sound - as it stands, Denarius only contains enough to give short-term satisfaction to even the most ardent shoot-'em-up fan.

Presentation 78%
Decent title screen and credits, but no options.

Hookability 63%
Straightforward enough, although returning to the start of each stage every time you die is annoying.

Lastability 48%
Enjoyable, but the repetitive action and levels eventually lead to boredom.

Overall 57%
A colourful and noisy shoot-'em-up which lacks substance.

A colourful and noisy shoot-'em-up which lacks substance.