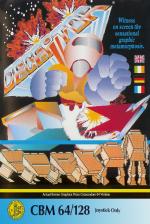 Hot on the heels of Transformers and Gobots, comes yet another robotic metamorphological hero - Deceptor.

After many years of training by his Elders, Deceptor has not succeeded in mastering the series of transformations that allow him to alter his shape, from swift-moving land vehicle, through robotic alter-ego, to gently hovering aircraft. Now he has to prove his worth by completing a series of hazardous assault courses.

There are four available options, allowing the player to practise, adjust the control settings, view the high-score table and finally start the mission.

The Deceptor's alien world takes the shape of a three-dimensional, horizontally scrolling, forced perspective assault course. The objective is to reach the Guardian at the end of each assault course and destroy it before the time limit expires. The player has unlimited Deceptors to complete the task, with the mission only ending when the time runs out.

Throughout the level there are square packs which yield one missile (used to combat a Guardian) and ten seconds of extra time when touched. When a Guardian is encountered, Deceptor reverts back to his human form and uses a hand-held blaster to despatch the creature. Shots are aimed using the joystick, with the resulting explosions giving the only indication of a shot's accuracy.

When the Guardian is destroyed the time left is converted to bonus points and Deceptor progresses to the next, more difficult sector.

Although the gameplay is simple, offering nothing more than a race against time across an assault course, it's still highly addictive. Negotiating the courses requires a blend of reflexes and quick thinking, and a keen eye is needed during the shoot-out phase.

That, combined with the urgency generated by the timer produces an exciting and mentally stimulating challenge. It's a shame that the multi-load cassette version is so frustratingly awkward - the way Deceptor is structured means that more time is spent rewinding and waiting than playing.

On the other hand, the disk version is great and well worth looking out for.

Having seen the ad for Deceptor, I was expecting the worst, maybe because of the quality of the previous Transformer-type games. However, I'm pleasantly surprised. The gameplay harks back to the old Zaxxon style, but from a more oblique view.

The forced perspective graphics are a little crude, but they portray the action well, and the transformation sequence is well executed.

The game's only ugly feature is the sound, with the title tune being a little 'bassy' and the effects instantly forgettable. This is well worth a look - especially the disk version, as the multi-load on the cassette version reduces the enjoyment somewhat.

This issue's 'Odd Game Of The Month' prize goes to Deceptor. It's a cross between Marble Madness, Zaxxon and Transformers - honest! The perspective graphics work pretty well and a good feeling of a solid, three-dimensional world is generated.

The Deceptor's metamorphosis sequence is also quite impressive, but I ultimately found myself setting the transformation control to the 'off' position, as it intrudes on the action too much.

The presentation of the disk version is superb, although the ability to alter the control settings is a nice but somewhat ineffective addition.

I'm not too sure about the appeal of the cassette version, but on disk, Deceptor's a winner.

Presentation 90%
Plenty of options to alter the gameplay, plus the ability to save out the high scores. A practice and demo mode are also included.

Graphics 80%
An effective three-dimensional landscape and some suitably alien sprites. The transformation sequence is especially neat.

Sound 69%
The unusual soundtrack and spot effects add to the alien atmosphere.

Hookability 68%
Addiction sets in as soon as the control method and perspective become familiar.

Lastability 75%
Plenty of screens and enough variety to provide a lasting challenge.

Overall 80%
An original and unusual variation on the transforming robot theme.

An original and unusual variation on the transforming robot theme.