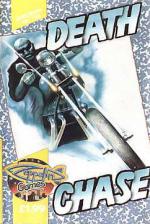 Have you noticed how in the past few months cheapie games have edged up, ever so subtly, from £1.99 to £2.99 - a rise of 50%? Zeppelin is one of the few houses to keep its prices down, but if Death Chase is anything to go by, I can t say I'm too surprised. Certainly the legend '© 1983' that appears after the game has loaded is enough to give you the screaming heeby jeebies. Shouldn't software houses have to print the original publication date of the game in a nice visible place for the potential punter? Record companies and book publishers have to. Nonetheless, Death Chase is actually a bit of a surprise. Based without shame, or acknowledgement, on the forest chase in the third Star Wars film, Return of the Jedi, it has you chasing a couple of geezers on motorbikes through some extremely thin trees and trying to zap 'em before they can escape (they're convicts, see). Graphics are rubbish, gameplay is jerky, but... but... but... well, actually I quite enjoyed it. The basic idea is, after all, pretty good although I'm sure I've seen something similar, and much slicker, quite recently (Let me know if I'm right.) But to my amazement I found myself quite unable to tear myself away from this odd little game - which is probably not much of a recommendation, as many rueful YS readers will testify. Just don't expect much - you might be pleasantly surprised.

Graphics are rubbish, gameplay is jerky, but, to my amazement, I found myself quite unable to tear myself away from this odd little game. Don't expect much and you might be pleasantly surprised.