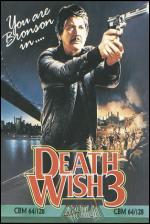 New York folk can rest easy in their beds once again. The reason? Paul Kersey's back in town! Charles Bronson's vigilante character from the infamous Michael Winner films surfaces on the C64 to continue his one-man fight against crime and injustice.

Our people's hero is armed with a 475 Magnum hand-gun, a pump-action shotgun, a sub-machine gun and, to cap it all, a shoulder-held rocket launcher. Each weapon is brought into play by pressing the control key to cycle through the armoury. The weapon in use is pictured at the bottom of the screen, together with its remaining ammunition.

New York is displayed as flick-screen backdrops, inhabited by all manner of New Yorkers, from thugs and punks to grannies, police and even prostitutes.

Whenever a street intersection is met, Kersey turns to face in any of four directions, with the background scene altering accordingly. A map of the area is displayed below the main screen, showing Paul's location within the city. Pressing 'M' toggles the map, first to show the gang leader's positions, so they can be located and destroyed (the objective of Kersey's self-appointed crusade), and secondly to display replacement weaponry. Both weapons and leaders are found within houses which Paul enters from the streets. In some rooms Kersey can look out of the window onto the street and safely take out baddies at his leisure.

As the slaughter continues, the score reflects the accuracy of the vigilante's shooting. A negative score is achieved only when good guys are being blown away - bystanders or the police for instance. Despatching bad guys results in a healthy positive score, and successfully quelling riots and killing gang leaders results in large bonus scores.

Gremlin might well have gone to the Board of Censors with Death Wish 3, as it contains several bloodthirsty death scenes - not least of which is the total blowing away of someone with a rocket launcher... gruesome!

The method of changing Paul Kersey's situation within the city is somewhat misleading, and an eye must be kept glued to the map or else confusion soon sets in.

Unfortunately, it seems that the game lacks a definite conclusion, and as such becomes a matter of stamina rather than skill. This completely undermines the achievements within the game, and results in a rather mindless shoot-'em-up.

Another uninspired release from a company of considerable talent.

Computer games don't come much gorier than this! The sprites are nicely animated, and the way they're shredded by gunfire and blown apart when bombed is amusing, if not a bit gratuitous.

The problem is the flawed gameplay. Weapons and safe rooms are far too easy to find, and you can leave the stony-faced sprite alone every so often to replenish his lost energy.

My first go went on for ages - and with very little practice it's possible to play for hours on end. The action is still fun though, but the enjoyment is only short-term as shooting down people wears off quite quickly.

The programmers have obviously made the best they could out of the pretty limited film, but it just hasn't got enough depth or variety.

This isn't nearly as good as I expected. Apart from being morally unsound (shooting down human beings with bazookas and guns can't be that good for public relations), Death Wish 3 is also badly constructed.

I quickly got lost within the very similar streets of New York, and the pointless rotational control method just served to confuse. It's all so illogical, you clear a screen of bad guys and leave, only to return a second later and find them alive again!!!

The graphics aren't particularly brilliant either, and once you've seen the gory death sequences a couple of times, the novelty wears off. Not even one for fans of the movie, I'm afraid.

Presentation 67%
Few options, and a structure that's lacking in variation.

Sound 52%
A jaunty soundtrack which lacks the appropriate air of tension and menace.

Lastability 59%
The game could go on forever - but boredom sets in long before a satisfactory conclusion is reached.

Overall 64%
Mirrors the pointlessness of the films a little too well.

This game mirrors the pointlessness of the films a little too well.