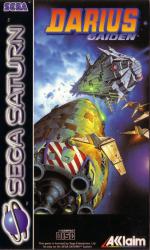 With a scenaio straight from the pages of Viz, Darius seriously expects us to involve ourselves in a battle with intergalactic... fish. Yes, a long time ago in a galaxy far, far away, a peaceful land-loving world was attacked by hordes of Haddock interceptors, interstellar pikes and cockles with outboard ion engines. Those warmongering masters of seafood (should that be fishmongers?) left little behind, except a small squadron of fighters out to shed a few scales.

Leaving you to battle across twenty plus stages in a side-scrolling shoot-'em-up that looks like something out of the arcades in the time before Sega's polygon games. As you go, you'll be confronted with a veritable sea life centre of cyber finny tribes armed to the gills.

Destroy the Aqua-people by all laser means.

In place of a linear level path, the game has a wide range of stages that fan out, with a choice of two stages from each completed stage. This means you will have to complete the game several times to see all the areas.

If there's one part of the game set to concentrate your mind, it's the boss encounters that end each stage. Although few of them are as visually impressive as the initial face-off with the golden ogre, they each have a formidable armoury of attacks under those fins.

1. Golden Ogre The boss on the first stage, Golden Ogre, is actually a very impressive composite of animated polygons, that swipes his tail, flakes his scales and, er, launches that mouth laser which is a well-known part of fish anatomy.

The game operates a power-up system, but not really under your control. Continue picking up the shields and it will increase or replenish your powers in three areas: missile weapons (green shield); deflector shields (blue shields); main weapons (red shields).

One feature approaching novelty is the occasional opportunity to hijack the baddies to your own ends. Certain creatures have pearls embedded in their form. Grab these with colliding with the rest of the body and the fish will turn its fire against its former compatriots.

This game should be called 'Ceolocanyth. Why? Because it's a cool word and best describes what Darius is. A ceolocanyth is an ancient fish that everyone imagines is extinct until someone dredges it up on the coast of Madagascar or somewhere. Darius is an example of a game genre everyone thought was long since gone - the horizontal scroller, and even the bizarre fish malarkey doesn't make it look any more than it is.

That is: hopelessly dated and visually very tacky in places. Yet in others it looks rather good, with huge explosions and a few smart bosses. Also, dig the weird music. All in all, a strange 'catch' for Acclaim to make, snapping up a very Japanesey title. Howeer, we can't deny that it's rather fun to play, and at the very sensible price, not all that repellent.

Strange old fella, this. It's not exactly groundbreaking, but it still manages to prove that shoot-'em-ups are alive and kicking. The fishy feel is a weird angle to take, but some of the more impressive bosses (particularly the big yellow fish) and really smart, and show that it was worth going for. Those of you wanting something new and original may find this won't be your kettle of, er, fish, but others will love it.

Graphics 78%
P. Some eager effects, if not quite eye-popping for the Saturn.
N. Some truly dire wallpaper graphics and sprites.

Animation 71%
N. Generally in short supply, even on the bosses.

Music 82%
P. The operatic music is very strange, even considering the rest of the game. Kind of early Eighties experimental synth. We dig it.

Playability 80%
P. As non-nonsense and as challenging as blasting gets. Imagine Parodius with more attitude.
N. Suffers from being simplistic and cruddy in places.

Lastability 73%
P. You'll find it more than a tad tough, and it does become strangely compulsive.
N. Superficial next to the likes of Thunderhawk 2.

Overall 79%
One of those crap games like those crap tunes you can't help humming. A possessor of a perverse attraction.

A possessor of a perverse attraction. You'll find it more than a tad tough, and it does become strangely compulsive.