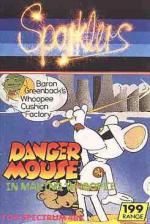 Danger Mouse could be a great computer game star. Unfortunately none of the games released with his name attached has matched up to the potential of the character.

Danger Mouse In Making Whoopie is no exception. It's a pretty basic arcade adventure maze game with some platform screens thrown in for good measure. A nice idea which doesn't quite work.

The scenario is that Penfold, DM's faithful sidekick, has been kidnapped by the evil Baron Greenback who is out to disrupt the United Nations by making enough whoopee cushions to fill all the seats in time for the next congress meeting. He hopes the cushions will create such confusion that his plan to take over the world will work.

The first screen of the game shows DM in his car at the top and a plan view of the maze-like streets below. Controlling DM's car is difficult to say the least. You must aim for the dead ends where you'll find entrances to the platform screens which, when successfully completed, yield a useful object which DM can carry back to his car and use to get past an obstacle in the streets.

Graphics are average, sound the same and gameplay basically frustrating. Nice idea - shame about the game.

Graphics are average, sound is average and gameplay is basically frustrating. Nice idea - shame about the game.