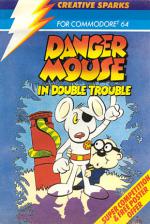 Once more your favourite Rodent has been enlisted to save the world. But who's trying to conquer it? Only his arch rival and general all round nasty, Baron Greenback, the infamous Toad. This time the devious swine has made an android impression of our hero, and with it he intends to dominate the world (shock! gasp! horror!). Your mission, along with the bunging Penfold, a coward of a Hamster if ever there was, is to infiltrate Greenback's base to stop the meanies from carrying out their dastardly deed. This can only be done by switching off their android Danger Mouse before it is electrically induced into life.

The world saving mission consists of three parts. The first stage sets DM and the hapless Penfold in their trusty aero-car, blasting Greenback's troops of nasties as they attempt to prevent him proceeding to the Baron's headquarters. The screen is split into several parts, the main section being a horizontal picture of the aero-car on the left of the screen, with the nasties flying in from the right. They can easily be disposed of by firing musical notes, which don't actually destroy them but set them off in another direction. The other section of the screen shows a vertical view of the action and which nasty must be shot. Once DM has travelled a sufficient number of miles the scenario switches to the Jungle caper, in which DM has to jump over two crocodile infested swamps. Thankfully they don't kill him, but serve as a bouncing platform which enables DM to scamper across the swamps. Failing to bounce on the crocodiles correctly results in DM taking a quick plunge into the murky waters.

In the next stage of the jungle caper DM has to cross a clearing whilst trying to avoid a Puma. Luckily, there is a tree provided on which our hero can climb to safety.

The third, and final section of the game is set in Greenback's headquarters where the real DM has to prevent the completion of the android DM by turning all the electrical switches purple, thus deactivating the mechanical monstrosity. This is made increasingly difficult by the intrusion of Greenback's slimy hand which is desperately trying to switch the android on. So, DM, it's up to you to save the world again. Oh, and by the way - you've only got six minutes.

This must be aimed at a younger generation of Commodore owners (the under tens). The game is pretty simple, with only three tasks to complete before you start on the first one again. The graphics vary throughout, from pretty poor on the first two screens to quite good on the final encounter. Sound is poor and suits the game. Even at two quid it doesn't offer much - buy it for your kid brother.

Danger Mouse is back, on the Sparklers label this time, and I ask myself if it was really worth it. This is pretty lousy. The sound is reasonable but is let down by the graphics which consist of only one colour per character. The gameplay isn't too hot either, I managed to easily complete the first two sections of the game - although the third part's quite difficult. Maybe not the best choice for the hardened arcade player, but one more suited to smaller children who want an easy game to play.

Hookability 32%
Easy enough to get into, but not very interesting.

Overall 30%
Just like the cartoon - only lasts for five minutes.

A game more suited to smaller children who want an easy game to play.