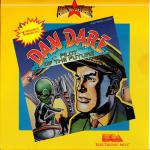 Dan Dare, pilot of the future and comic book hero of the Fifties, continues his adventures... not on paper, but in the form of a computer game - courtesy of Virgin's Gang of Five.

For the uninitiated, Dan Dare first appeared in The Eagle comic in 1949 and quickly built up a huge following which continued until the demise of The Eagle in the 1960's.

He reappeared in 2000AD in the late Seventies and then again when The Eagle was relaunched in 1982. During these years, he successfully averted many potentially terminal threats to mankind, and throughout his adventures one alien made his presence known more than any - the green swollen-headed Mekon, along with his group of followers, the Treens. This despicable creature, twisted beyond measure, has sworn to terminate mankind's existence, but so far his efforts have been in vain. Until now, that is...

Dan kicks off his computer adventures with one of the toughest missions he has ever volunteered to undertake. The Mekon has captured an asteroid, placed an atomic bomb and a nuclear fission drive at its centre, and has set it on a collision course with Earth. If the asteroid hits its target then Earth will meet a certain doom. But Dan and his chums, Professor Peabody, Digby and his pet 'thing', Stripy, are already winging their way towards the heavenly menace in the starship Anastasia in an attempt to avert its potentially deadly threat.

The game is a flick-screen arcade adventure set a few moments after Dan has landed on the asteroid. Unfortunately, the mission has already run into trouble... as Digby and Prof Peabody were leaving the Anastasia they were ambushed by the Treens and carried away to a compound deep below the asteroid's surface. Dan and Stripy managed to get away, but now there's an extra problem - Digby and Peabody have to be freed from the Treen prison before the asteroid can be destroyed.

Dan's adventures begin on the surface of the asteroid. He has to make his way down into its interior, done by climbing down one of the many ladder-lined shafts. Doing so takes Dan down into a system of caverns which lie just below the surface. Here, exploration yields its own rewards, but care is needed as the place is crawling with Treens which pose a direct threat to Dan's mission - and existence. If a Treen is near, a cartoon caption appears at the bottom of the screen warning Dan of the imminent trouble ahead. If he stays put, the Treen attacks and Dan automatically goes into 'fight mode' - a box containing two bar graphs is displayed on the screen, one relates to Dan and the other to the Treen. Pushing the joystick up or down moves Dan's guard up and down, and pushing forward makes him punch. When a punch lands home, the recipient loses a chunk from his energy bar, which has fatal consequences if it reaches zero. If this unthinkable event ever happens to Dan, the game ends and the Mekor will go on to destroy old Mother Earth.

Dan can also dispose of the Treens by lobbing grenades, done by pressing the fire button and moving the joystick backwards. The only problem with this method is that Dan has a limited amount of grenades - and at least ten of them are needed to destroy the Mekon...

During the game it is possible for Dan to interact with certain objects. If Dan moves near to an object, a caption appears at the bottom of the screen. Keeping the fire button depressed and moving the joystick back or forward cycles through a series of options, displayed in the caption. When what you consider to be the right action appears in the caption box, taking your finger off the fire button executes the action. There are quite a number of objects which must be correctly used before it's possible for Dan to delve even deeper underground and gain access to the Mekon's control centre.

When Dan finally reaches the control centre similar principles of object interaction and fighting with Treens apply. But there's also the problem of finding and freeing Digby and Prof Peabody, destroying the three computers which control the trajectory of the asteroid, and finally meeting the Mekon himself in a deadly confrontation in which there can be only one survivor!

However, there isn't an end to Dan's problems even if he does manage to dispose of old green bonce; the Mekon is a sly character who doesn't let the fact that he's dead stop his revenge. He has made sure that in the event of his heart stopping, a powerful time bomb will start to tick down. This gives Dan a mere two minutes to get back to the surface of the asteroid and escape, companions in tow, in the Anastasia.

To make matters worse, there is also a time limit to the whole game - Dan having from 12.30 to 13.00 hours to completely finish the operation. Will he be able to do it? He's never failed before - but then, this time, the fate of the Earth is also in your hands...

This arcade adventure is one of the best I've played in a long time. It's got a fantastic atmosphere and is as close to the original cartoon strip as is possible.

The humour in the game is really great too - just try executing some of the less than obvious options! Controlling Dan and making him interact with objects is really easy and fighting with the Treens is great fun. The problems in the game aren't too tricky to solve as they are logical and require lateral thinking. It's very rewarding when you finally work out what to do and some have very spectacular results. The graphics are truly stunning and it's quite safe to say that this is the first interactive cartoon strip.

Brilliant stuff Gang of Five - when are you doing a follow up?

I think Virgin made a good choice in producing a different Dan Dare for each computer, as there is no way the Spectrum version would have worked as well. As this version stands, it's one of the best arcade adventures on the market. The things that really impressed me were the torch searchlight effect and disguising yourself as a Treen. The graphics are beautiful, especially the backdrops in the Mekon's underground complex. I really enjoyed Dan Dare - it's a brilliant game which shouldn't be missed.

After nearly two years of intensive and pensive programming, Andy Wilson has come up with a brilliant game - the best arcade adventure I've played yet. It's certainly been worth the wait. There are many neat problems to overcome throughout the game, some easy, others tough - all of them logical and satisfying to solve. Dan Dare also looks superb - Ian Mathias has produced some exceptional cartoon quality graphics to complement a very playable and highly competent interactive comic strip. Dan Dare is quite simply ten pounds well spent and I have no reservations in recommending it to any avid arcade adventurer.

Hookability 97%
As easy and enjoyable to play as the comic strip is to read.

Lastability 91%
The Mekon and his motley crew have plenty of nasty tricks up their sleeves...

Value For Money 90%
An expensive, but novel interactive comic strip.