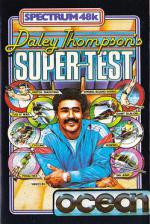 And you thought there were enough sports games on the shelves of your local computer store already! Well, make room for one more - for despite the fact that you've probably played Hypersports, Decathlon, Superstar Challenge and Summer Games II and Daley Thompson's Super Test is great fun!

No, this isn't a throwaway selection of games that didn't get into the original Decathlon. It's a neat new game in its own right - despite the sports overkill.

I'll pick a couple of the newer events to talk about here - after all you've probably already had a go at cycling, rowing, shooting, etc.

Ski-jump is great fun. You have to build up speed on the downward slope and time your jump and landing just right. Difficult at first but soon mastered. You'll enjoy going for that mega-jump! The screen display shows a close-up view of your skier as he hurtles down the slope and through the air while on the right hand side of the screen you see a plan view of the jump and an expanded side view in little windows.

There's a power meter at the bottom of the screen view in little windows.

Penalty kicking is also a fun event. And the goalkeeper certainly isn't slow on his feet. You get an overhead view of the goal and goalie plus a readout of the angle of your kick.

The Tug o'War is another new event - you can pick a variety of opponents depending on the score you want to achieve. The tougher the opponent the more points you get for beating him.

There's a high score feature and a really nice end screen. If you win, you see yourself standing on the rostrum and the crowd behind you shout things like "Far Out" and "Great" - words which appear in little bubbles.

DT's Super Test is a fine sequel to Decathlon and will wreck many more joysticks!

A fine sequel to Decathlon... It'll wreck many more joysticks!