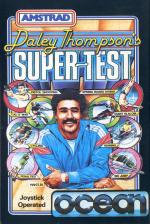 By now, many of you may be sick of the sight of sporting games needing a good waggle, but this follow up to Daley Thompson's Decathlon has eight new events that you may not be able to resist playing. These certainly aren't Daley's Olympic specialities but an athlete like him can take on any challenge - even ski jumping.

The game loads in two parts with four events in each. The first day's events are pistol shooting, cycling, spring board diving and giant slalom. Having sweated over them, you can move on to rowing, penalties, ski jump and tug 'o war to round off the muscle mauling. The two days are played as individual games and you don't need to complete day one to play day two.

The first event is pistol shooting and this is the only one which requires no waggling - just a good eye and fast reactions. Daley appears at the bottom of the screen with six revolving targets in front of him. One of these will flick into view - cross has to be homed in on it and a bullet fired before the target disappears again. There are ten bullets to be fired and three chances to attain the qualifying score. Failure will lose one of Daley's three lives, to the accompaniment of a delightful little tune.

After this skill-testing event, there's a straightforward waggle at cycling. You only get once chance to cycle down the course within a time limit while the animated character on screen whizzes his legs around like a wild thing. Test number three gets you back to good timing with a spring board dive. Here you have to time bounces on the board to gain height and then waggle furiously to make as many somersaults before trying to make a graceful entry into the water. Three dives are allowed and the scores for each are added together to try to beat a qualifying score.

The diving is quite a tough event to master and is followed by another difficult task, the giant slalom. Here you have to zig-zag down a course as it scrolls up the screen. The skier is started off and speeded up by a bout of waggling and then steered left and right through the slalom gates. The course has to be completed inside a time limit and there are only two chances to do it. Sharp turns and hitting flags will slow the skier down while missing a gate or skiing off the edge of the course disqualifies him.

Day two opens in vigorous style with a rowing contest against the computer. The two competitors paddle horizontally across the screen with the player having two tasks. The first is to beat a qualifying time while the second is to beat the computer rower for a bonus score.

Off the water and onto the football field now for some spot kicks. The computer defends a goal on the right of the screen with a goalkeeper while a player on the left has to step up and try to whack five balls past it. The strength of the kick is built up by waggling as the player runs in and then the direction and height of the ball by the timing of the pressing of the fire button and how long it's held down for. There's a qualifying score with points being awarded for each kick.

Ski jumping isn't your everyday sporting event but here there are three chance to achieve a qualifying distance. The screen shows three views: a close-up of the skier, a side view of the whole slope and a top view of it as well. As the skier starts his descent waggling builds up his power and a timely press of the fire button launches him off the bottom of the slope. He now flies through the air with the greatest of ease until the ground comes rushing towards him. A safe landing can be achieved by timing a press on the fire button again but otherwise you hit hard and with legs and arms flailing roll into a large snowball.

The last challenge is the tug o' war where eight opponents await you in a waggle to the finish. On the first run through, you only have to take on the easiest man but in later rounds the heavier, stronger men have to be faced. After completing four events on either day, you start them again but with the qualifying scores and times made harder.

The graphics and animation are slick, smooth and colourful while the musical accompaniment is varied and tuneful. Each event has been well thought out and developed to make them playably addictive but tough too. A most enjoyable bash with plenty of variety in events and skills.

By now I'm sick of the sight of sporting games needing a good waggle There's just no interest in the physical effort required. Of course, if waggling turns you on this game will please you - I can't deny that it's very well done with some pleasing graphics and animation. It's just that I found it a bore.

N. Guaranteed to test your joystick to the limit.
N. Another in the long line of sports/waggling games.

Excellent graphics and animation. Events are challenging and get tougher.