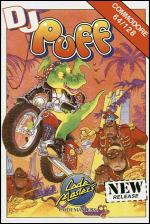 Respect to DJ Puff, the coolest dragon dude around. Phil "Medallion Man" King gets on down in his platform shoes and goes in search of DJ's lost CD collection (damn, I thought you said 'seedy'! - Phil)...

Once he was "Little", but now Puff the dragon has become chillin' he's known as DJ. No Pet Shop Boys for this fashion-conscious fire-breather - only the wickedest sounds will do to rave on down to with his mates. Respect to that.

Sadly, the island where they all live (don't dare mention 'Living On An Island' by Status Quo) is also home to the totally square Captain Kripp. He hates anyone having a good time, so he's sent his gorilla army to nick DJ's record collection and scatter it all around the platform-filled island.

Ravin' mad, DJ sets off to recover his CDs by exploring platform-filled, multi-directional scrolling levels. There are hazards galore, contact with which removes one of DJ's lives - thankfully he starts every new level with his original five. Gimme five, man!

As well as avoiding spikes (Puff doesn't like 'em up his bottom, oddly enough!), pits and water, DJ has to watch out for Kripp's cronies. These include egg-dropping birds, snapping fish, spear-chucking Aztecs and spiked-ball-throwing snails!

It's just as well DJ can kill them by breathing fireballs or, even better, by -using collected weapons like bombs and full fire-breath. Fruit is collected for bonus points, while the letters 'EXTRA' earn Puff an extra life.

If it all sounds a little familiar, yes, I have to say it looks and plays remarkably like CJ's Elephant Antics - you even activate the bombs in exactly the same way (by pulling down on the joystick)!

The main difference is there's no two-player mode: otherwise the action's just as playable, if a tad unoriginal. Five lives per level might seem a lot, but they soon disappear - especially when you haven't yet learnt the level layout. It took me a few goes to complete the first level, but I just had to keep playing.

There's plenty of nice scenery too (especially the wavy water), all scrolling smoothly, plus some cute sprites including the brilliant DJ himself - his moves are well cool.

Strange, then, that the soundtrack is remarkably similar to 'Hello Dolly' - oh well, it's jolly, if not exactly chillin'! It all goes to show that you don't necessarily need originality for a good game. For the record, DJ Puff is a compulsive hit.

Sorry Phil, I can't agree. DJ Puff is a fine game in its own right, but it's too close to previous Codies releases for its own good.

What's the point of splashing out four quid on a game that's a virtual carbon copy of one you've got already? The graphics are changed, they've dreamt up a new way of saying "run round collecting things" and called it a plot, but the gameplay is definitely CJ's Elephant Antics revisited.

If you haven't got CJ's, or have completed it and are looking for an equally tough challenge, then DJ Puff is for you! Failing that, buy the brilliant Steg instead - now there's a game that's not short of ideas...

Presentation 82%
Five lives per level and even a single load!

Sound 78%
Well hello Dolly, this tune is oh so jolly!

Hookability 76%
Familiar action makes it easy to get into the groove.

Lastability 70%
Nothing new to see, but compulsive and challenging.

DJ Puff is a fine game in its own right, but it's too close to previous Codemasters releases for its own good.