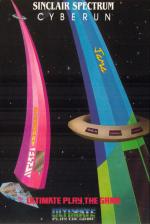 Once upon a time, everybody who owned a Spectrum would eagerly await the launch of a new game from Ultimate. Their products were renowned as being highly innovative and pushed the limits of what people thought the Spectrum was capable of back even further. Recently however, their products seem to have lost their edge and this had led to an agreement being struck between Ultimate and US Gold. Cyberun is the first game to come out of the stables of this new partnership.

The Beta Gamma System is an isolated system of stars and planets in the Amoebus nebula. The main reason why anyone should take any notice of this fact is that the system is the only known source of the anti-element Cybertron in the universe. Cybertron can be transformed into Cybernite, the hardest substance yet discovered. The problem with mining cybertron is that the planets exert a phenomenal magnetic pull. Anyone who can succeed in gaining access to Cybertron controls the whole universe. To this end, parts of a ship have been shipped out to the system where they wait to be re-assembled.

The game starts with you in your command module, which is a fairly weak device. Additional parts of your craft can be found floating on clouds or static structures and are picked up automatically when you move over them. The most important of these are your thrusters - both vertical and horizontal for without these, your mobility is severely limited. Other features include a large pair of pincer-like legs and a canon which fires bullets that automatically home-in on your enemies. These are many and various, and include saucers, gunships, comets and some strange flying fish that tow force fields behind them. Your ship is fitted with a laser to help you contact these but, believe me, the cannont really does come in useful. One annoying feature is that sometimes when you collide with an object, you are instantly destroyed whilst on other occasions, you can merrily bounce your way off several.

There are many other features contained within the game. Various parts of what appears to be another craft to be assembled at a later date, fuel pods to be collected and underground caves to be explored although with Ultimate's usual policy of non divulgance of instructions, nobody that I've spoken to had much of an idea what's expected of them. The graphics of your ship are nice and clear, reminiscent of some of Ultimate's earlier space games but, overall, there is a distinct feeling here of deja-vu.

The first Ultimate games were highly innovative and pushed the limits of what people thought the Spectrum was capable of. Although this is graphically lavish and reminiscent of some of Ultimate's earlier space games, we have already seen this idea many times before.