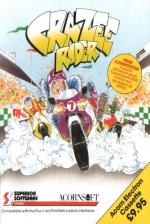 Don your crash helmet and zip up your letters. You'll need nimble fingers, fast reactions and a kamikaze streak if you are to survive Crazee Rider, a superb motorcycle race game.

The screen display shows your bike, speedometer, race position indicator and view of the track. At the top is a bird's eye view of the race track - there are seven in all.

As the starting lights change to green, 59 bikes fly past as you accelerate towards the first bend.

The micro cheats here as the computer controlled bikes accelerate to maximum speed instantly, whereas it'll take you at least half a mile.

Luckily, your racer has been tuned by the best mechanics in the business and they have managed to squeeze a few extra horses out of the engine. This means, flat out on the straight, chin on the handlebars you can easily overtake the fastest of the micro bikes and work your way up the field.

The back markers can be a problem as they have an annoying habit of getting in the way at the worst possible movement, usually in the middle of a bend.

These aren't easy to negotiate, but you can see what's coming up by looking at the plan view of the track at the top of the screen. Your position is shown as a large red dot.

After discovering you can't crash or go off the track, my first instinct was to simply hold the throttle wide open. I soon discovered this wasn't the best tactic however and your speed drops rapidly as you near the edge of the track or ram the bike in front.

It soon becomes clear that it's best to follow the racing line through the bends. With one eye on your speedo and one finger on the brake, swing from outside the track to inside and slide back out again by snapping the throttle open as you exit the bend.

Although Crazee Rider is a fair simulation of a motorcycle race it's not intended to be accurate. It's more of a cross between an arcade game and a simulation. Points are gained by riding round the track and passing the opposition. You can also ride alongside the computer bikes and ram them off the track to gain bonus points.

Providing you finish in the first six you move on to race at the next track. It'll take a few laps to familiarise yourself with the layout, but unfortunately, you aren't awarded this luxury.

Crazee Rider is an exciting game - it's fast, challenging and there's plenty to keep you entertained.

Crazee Rider is an exciting game - it's fast, challenging and there's plenty to keep you entertained.