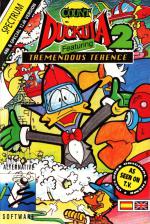 I've never actually watched the Count Duckula cartoon series on TV, so I don't know a lot about the various characters and stories. However, I do know a good computer game when I see one, and Count Duckula II isn't the best example. It does have a few redeeming features though. Read on.

Von Goosewing (boo, hiss!) has managed to blast Duckula (our befeathered hero), Nanny and Igor into space by attaching a rocket to their castle turret. After dodging all the asteroids, satellites and empty bottles of baby lotion, they collide with none other than the quacking Count's all-time hero, Tremendous Terence, and - bang! - they all crash land on the planet Cute.

This is where you come in. You have to guide the Duck through the planet to find the lightning conductor that fell off his turret during the collision.

The planet's surface is covered in a series of platforms and ledges, some disappearing, some moving, some just standing still being really boring. But (but! but!), as this is the planet Cute, the inhabitants are things like Jack-in-the-Boxes, dolls and teddies. Touching these "cuties" makes Duckula become cuter, and if he ends up completely cute he'll have to stay on the planet. So avoid them!

You're armed with a limited amount of tomato ketchup which will temporarily disable the Cuties, but more can be picked up along the way.

There are other things to pick up to make you invincible for a short period of time, and also a wonderful feature where you can get Tremendous Terence to carry you across a screen if you just can't do it! (But you can only do this once so use sparingly!) There are two difficulty levels (easy and hard), but all these do is change the number of lives you have (20 on the easy version, 8 on the difficult).

Aiieee!! What happened to the graphics? They're virtually monochrome, very simple and very flickery. If this is intended to be a take off of the old black 'n' white Hammer Horror movies it succeeds. But at least they're clear.

The playability is flawed by the lethargic and sluggish controls, plus the fact that you only have to fall through about a quarter of the screen before you die, making the game a pain to play. (Sometimes you land on a platform only to lose a life because it was one pixel below the tiny amount you're allowed to fall!)

Count Duckula II is not completely ruined by these faults though, and there is quite a bit of entertainment value stored away inside it and the storyline is quite amusing. However, I can only recommend it to those who are fans of the TV series or are true platformer fanatics.

Not the worst platformer I've seen, but certainly not the best! If you like silent, slow, basic, dated, unresponsive, annoying games, get it! It's not completely bad though, there a few nice and funny touches. However, far and few between.

The playability is flawed by the lethargic and sluggish controls.