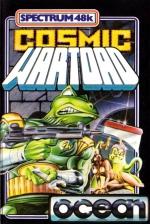 Wanted: a hero. Must have: nerves of steel; accurate marksmanship; goggle eyes, green, slimy skin and webbed feet! Yea - who wants to look like Harrison Ford when you can be a Cosmic Wartoad? And with your Queen transformed into a (Yuk!) human female by the 'orrible Rygellian Slime Beasts (Boo!), and chained beneath a descending buzz saw (Gasp!) then you have no time to lose.

Ninety, real-time minutes is the limit as you cross the void of Rygellian Time Nodes via your Cosmic Willy. Cosmic Willy? Who but Denton Designs could provide not a cursor but a tadpole? The Slime Beasts ain't glad to see you though when you arrive at a node you'll find a welcoming committee. Defeat this and you can occupy the node, but blow it and you lose a life and return to the previous node. Lose three lives (Oh no!) and you're returned to the start, but the chainsaw is ever nearer your prone Princess.

Don't worry if you don't fully understand all this nonsense... sorry, wildly exciting plot. The arcade action element as you travel between nodes takes three distinct forms, of graded difficulty. You'll have to clear the screen before your arrival is established, though with Slime Pawns reproducing and Sludge Slugs falling on you it's no picnic (Aww, and I bought the ants!).

Between bouts of frantic blasting comes the strategy element that sorts out the toads from the tadpoles. Your path across the eight by eight Time Grid allows for different courses, and some nodes are more useful than others as they provide Time Tunnels, if you can find the keys. You'll need others to recharge your gun. And all the while you'll be seeking to avoid the worst foes and collect the objects that you need to free the Queen.

With its iris-ing windows and great graphics the game is as stylish and idiosyncratic as you'd expect from the people who gave you Frankie, and it's pretty difficult. But who could resist when the prize for success is a webbed hand in marriage - and the price of failure is that you get to carry her home in two separate bags!

With its iris-ing windows and great graphics the game is as stylish and idiosyncratic as you'd expect from the people who gave you Frankie, and it's pretty difficult.