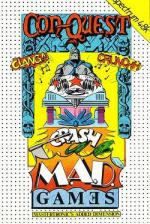 Whilst Mastertronic is clearly blazing some sort of budget path through the software industry, forcing everybody to reconsider just what to expect at what price, not all of its programs are of equal standard.

The problem with attempting to seriously criticise Mastertronic's stuff is that unless the program in question is actually appalling it seems churlish to winge too much about something that costs £1.99 or £2.99.

Con-Quest is a £2.99 Mad title. Presumably therefore it is supposed to be a little above the norm. It's not exactly a rip off but I doubt that you'll get all that much from it even at £2.99.

The astounding thing about Con-Quest is its programmer - Derek Brewster - one of the more respected names in the industry for titles like 3D Death Chase and Full Throttle. This game looks like it was knocked up in a couple of days by someone with little imagination and not all that much skill.

"Save Oscar's soul from the torment of walking through the eternal fires of Hell", is what it says on the box. It seems a reasonable request but I found myself leaving Oscar to fry at ever earlier intervals. Oscar is... well, I don't know what, but it's got two legs and a big head, and there are a large number of flickery sprites. The box says they are animated, but I'd say they zoom around the screen as though shot from a cannon. Some of them are sort of snakes, some of them are sort of dragons, all are certainly very wh***y.

The chameleon-like sprites (they change their colour to match the background) whizz around the standard Ultimate-style medieval castle with the usual Ultimate stairs up which you slide (?) and with accepted Ultimate fitments like caskets, books, axes and fountains. Oscar finds objects, picks them up, drops them and uses them - some open things, some are weapons one is a sort of protective globe.

In its defence, Con-Quest is big and some people don't seem to ever get tired of this sort of game. A few brownie points too for an icon system which is at least faintly original.

At £2.99 you won't find Con-Quest a hair-pulling waste of money but unless you are an absolute addict of this genre I think you'll probably wish you hadn't bothered.

A tired variant of Atic Atac graphics, themes and playing style that should long ago have been laid to rest.

A tired variant of Atic Atac... Graphics, themes and playing style that should long ago have been laid to rest.