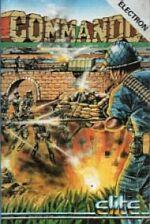 At last, a game for Rambo fans which displays all the subtle intricacies of that film's plot. Commando is a shoot-'em-up game very much of the old school that can nevertheless provide some hours of enjoyment.

Commando puts you, as Super Joe the lone marauding GI unburdened by morals, in the thick of battle. Armed only with an automatic rifle with a seemingly endless supply of ammo and a decidedly more limited (though replenishable) supply of grenades you must plough ever onwards into enemy territory.

There are plenty of trees and sandbad emplacements to hide behind which is just as well. This area is filled with the enemy, all of whom appear to be as well equipped as you.

Compared to the plethora of 3D scrolling games around today Commando looks a little sad, presumably because of its close resemblance to the arcade original. The characters are cute enough but the scenery only scrolls vertically, and that is in jerks of a complete screenful. It won't scroll upwards so you can't retreat. The area off the sides of the scren is forever out of Super Joe's reach, although the enemy spring from all extremes of your monitor with little trouble and even less warning. The keyboard controls are easy enough to master but, rather strangely, if you elect to use the joystick you still have to grope for the space bar to throw a grenade.

The object of the display of all this military might is to destroy as much as possible in the way of enemy soldiers and equipment, pick up boxes of grenades which they carelessly leave around, and make for the fortress.

Well, I never made it despite numerous forays. However, Commando offers much to please the confirmed electronic psychopath.

It is easy to start but not at all easy to complete and it offers a little of the elusive addictive qualities missing in so many games.

It is easy to start, but not at all easy to complete... Much here to please the confirmed electronic psychopath.