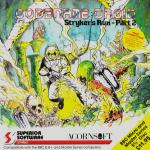 Codename: Droid is the sequel to Stryker's Run, which topped the BBC charts last year although I personally found it a little disappointing. Anyway, our true-blue hero commander John Stryker is back, this time to tackle the mysterious planet Volga. His mission is to penetrate the underground defence systems to locate and purloin a new secret spacecraft.

The nice thing about the Superior at its best is that storylines actually mean something, thanks to the usually excellent graphics. Codename Droid is no exception. The graphics are really first class, with superb colour and good sound.

The things that disappointed me in Stryker's Run first time round have been put right - there's fast action and lots of it. At the start, ten fingers don't seem enough - our agile Biggles of outer space can run, jump, kneel, crawl, shin up and down ropes, and use lifts to get around. He can also fly for short distances using a jet pack. He can blast aliens to bits, lay mines, and use his wrist computer to keep a wary eye on suit shield and blaster energy.

This stirring action takes place in a series of caves divided into four zones - surface defence, ancient shrine, crew's quarters and the missile factory. Each zone is heavily defended by Volgan soldiers. But someone has thoughtfully left various useful objects lying around to be picked up, like fuel cells, jet packs and microfilm cassettes. You must also find the four plutonium rods and navigation rom so you can power and fly the ship.

The controls take some getting used to, but stick with it - it's worth it. There's lots going on and plenty of imaginative features to keep you going for a good long time.

Definitely one to add to your collection.

There's lots going on and plenty of imaginative features to keep you going for a good long time.