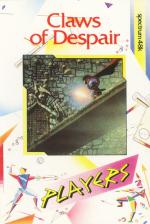 More a cause of depair as it turns out: another less than wonderful offering from Interceptor's new Players label. It is somewhat better than JTTCOESH, but still suffers from similar flaws.

Your quest is to recover a Staff of Saffrin, which will save your land for reasons not quite made clear in the slightly incoherent instructions. The game - what I've seen of it! - is set in a middle earth type civilisation, with inns and a walled city, plus a wizard and other magic.

Description is above average, generally well written. The full-screen graphics are mostly poor though, and excruciatingly slow. This is particularly noticeable, and frustrating, in a desert maze, where the same rather dreadful picture is drawn at each of the many junctions; and since you are killed frequently, you have to reload often, when the pictures are drawn again.

Indeed, death lurks round unfairly virtually every corner, and usually there's no turning back, making play frustrating, not challenging. EXAMINE is rarely responsive, and there's an unnecessary pause each time you use it. The game is generally unfriendly. The problems are tricky, but quite original and fun.

The packaging is well designed but otherwise I'm totally unimpressed by Players. A much better idea would be to re-release some old Interceptor games like Heroes Of Karn: they're better adventures, ideally suited to a budget price and have delectable graphics. Players is not budget adventuring at its best: Buy Seabase Delta or AETOASOG instead.

The game is generally unfriendly... EXAMINE is rarely responsive, and there's an unnecessary pause each time you use it.