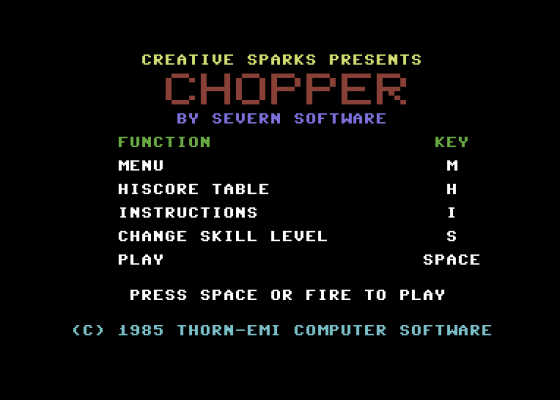 This very simple Scramble type game puts you in control of a helicopter. You have a mission to destroy what is supposed to be a virtually impregnable enemy base built into the side of a cliff.

The screen scrolls from left to right smoothly and your helicopter is placed on the right hand side of the picture. It can simply move up, down, or fire.

There are four types of action screen. The first puts you under fire from advancing helicopters. Shoot these and also shoot the non-firing jets and helicopters to gain bonus points. 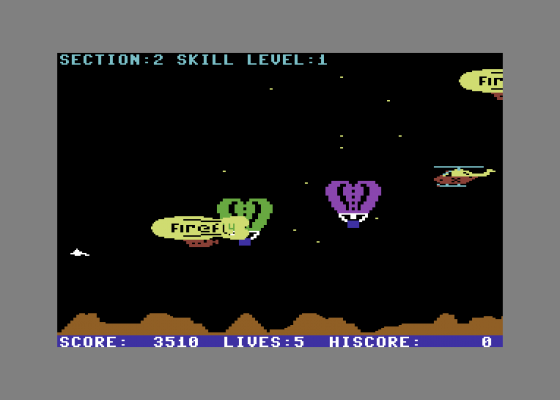 Next comes a bonus screen. You have to refuel in mid-air by guiding your fuel nozzle into the fuel pipe of the giant aircraft. Do this and you'll gain a huge 100-point bonus, fail and you'll lose a life.

The third screen involves dodging balloons, airships, and evil swans. As they move up and down, you have to thread yourself between them. You can't shoot anything, so swift manoeuvres are of the essence.

Once you've dodged everything you return to the bonus screen, which is exactly the same, only this time the plane is a little lower. 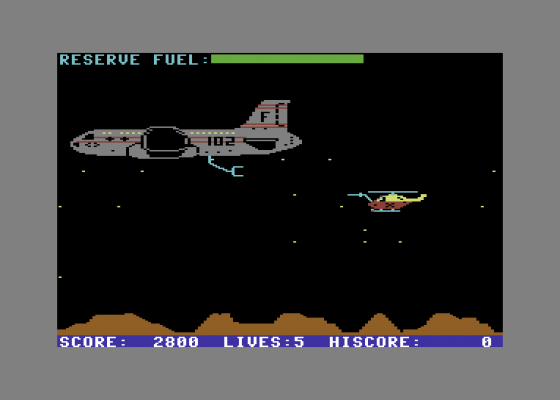 You then move to the final screen. This is the enemy's reactor, and you have to destroy this to accomplish your mission.

The reactor lies embedded in rock, and there are three helicopters guarding it. Two move up and down tracking your moves and the other one takes off from the bottom and moves up the screen firing at you. You have to shoot three bombs into the three small inlets which lead directly to the reactor. This is quite tricky since a) the helicopters are tracking your moves and therefore blocking your bombs; b) there's another helicopter rising up the screen firing at you; and c) the gaps to shoot the bombs in are about 2 pixels wide.

Even so it can be done. When you do complete the mission, you simply start again, moving up a skill level (there are six). As you progress through the levels everything becomes faster and you have to survive for a longer time before finishing a screen. 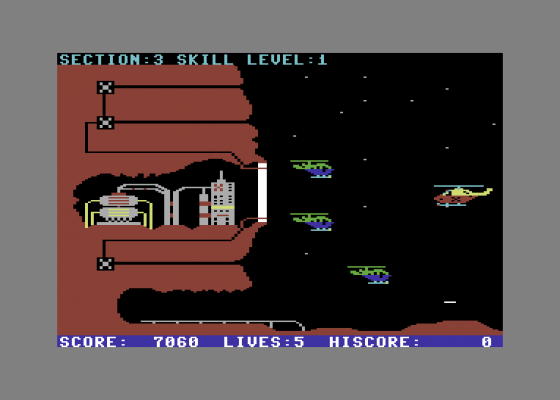 I first saw this game on the 'orrible Oric and it hasn't changed in conversion except for improving the graphics. With four stages and six skill levels, I found entertaining and pretty tough too. Certainly a great game on the Oric and a reasonably cheap one on the 64.

A really basic shoot-'em-up which would have done the BBC proud about three years ago. With only four screens of action to enthral you, this doesn't really make an impact. OK, so the graphics are decent, the game itself is fairly challenging, and it's only £2.50, but there are other games around which are cheaper and better.

As it stood, I thought this was quite a good game when it first came out for the Oric. Now that it's made a delayed jump up to the 64, I don't think so highly of it. The graphics and sound are okey dokey but the repetition of the three stages of action (well, three and a half, including the refuelling stage) meant my interest in the game dwindled quite rapidly. Still, not too bad for £2.50. 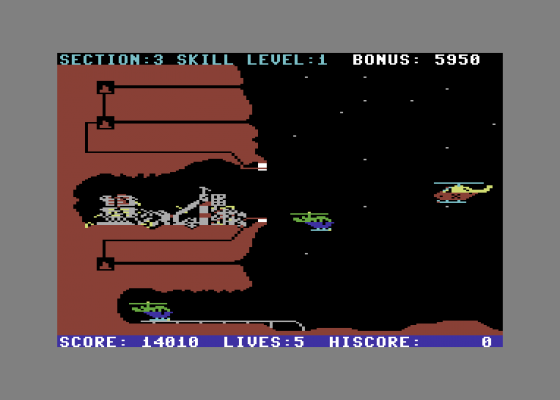 Originality 39%
Simple shoot-'em-up with nothing very new except refuelling screen.

Hookability 61%
Four different screens which can be difficult to master.

Lastability 46%
Once sussed the screens start to lose their appeal.

Value For Money 56%
A nice cheap shmup but pretty ordinary.

Once sussed, the screens start to lose their appeal... A nice cheap shoot-'em-up but pretty ordinary. 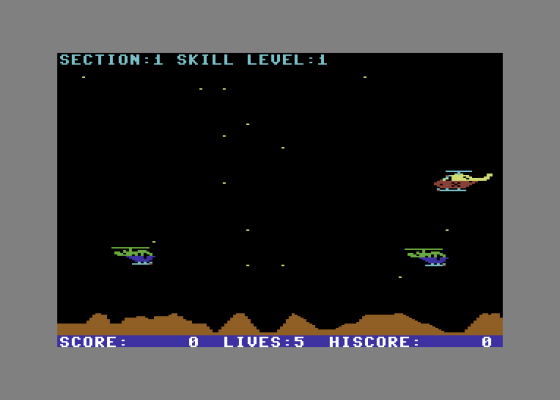