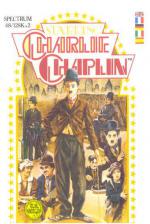 In my short(ish) time here at C&VG I've seen some great games, some good games and some less impressive ones from Britain's biggest software publishers.

Never, however, has a US Gold product made me laugh quite as much as Starring Charlie Chaplin. Yep, it was that bad!

It is a "unique game concept" indeed. The idea is that you are the director of one of our Charlie's black and white classics, and have a choice between making Modern Times, The Tramp, Married Life and a bunch of others based to varying degree on his movies.

So far, so good. You choose your script, you flick past the screen which tells the cost of each scene, the actors and props involved and so on and then... the comedy begins!

Yep, it's funny alright. Funny that there should be so little to do. Each backdrop, be it a ship deck, a country garden or a pub is laid out in exactly the same way: empty, with some steps to a balcony at the back.

Each is populated by a couple of characters who walk about, back and forth, across the screen. Every time, you have to move around this rather basic set in the manner most likely to amuse an audience and so make your flick a success. It dawns on you that an audience would have to be pretty starved of entertainment to be tickled by any of this.

The first film I attempted to make was The Immigrant, a tale of Charlie's arrival in America and inevitable falling in love with the woman of his dreams. The instructions advise you to perform "wacky stunts" on the other actors, but since the only "wacky" stunt my particular Charlie seemed to know how to perform was smacking people in the face with a good right jab, this soon began to pall, and I sent him roaming around the set instead, climbing ladders and suchlike.

If a black and white game is surprising on the Spectrum, then it is surely unbelievable on a C64 or (gulp!) an ST, however atmospheric it may be. The game obviously looks a lot better of the ST, but the gameplay is just so ill thought-out and limited, I can't imagine anyone sitting down and playing it more than twice.