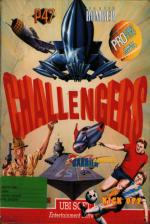 Take up the challenge from Ubisoft and add six fab games to your software collection with the Challengers compilation. For your hard-earned dosh, you get P47 Thunderbolt, Fighter Bomber, Pro Tennis Tour, Rick Dangerous, Carrier Command and Kick Off. A little something for all tastes!

The two games that really stand out here have to be Rick Dangerous and Carrier Command. The man with the hat's first adventure was a smash hit the first time it was reviewed, earning 81%. The cartoon-style graphics and sound effects were an instant hit with everyone in the Crash offices and I couldn't rest until I'd completed the game.

Carrier Command is aimed more at the serious games played. You take control of a futuristic aircraft carrier and all the problems that come with it. The mixture of excellent 3D graphics, strategy and shoot-'em-up action will have you playing this game for a long time to come.

Two types of flight simulation are also in the pack. P47 is an arcade shoot-'em-up game. The backgrounds scroll horizontally by as you blast the enemy out of the sky. Fighter Bomber puts you into the cockpit of a real plane and lets you take on a battle from the pilot's viewpoint in total 3D.

Sports fans won't be disappointed with Challengers either. There's Pro Tennis Tour and Kick Off to keep them busy. Kick Off is, of course, the football game that caused a storm on 16-bit machines. Unfortunately, the conversion to 8-bit wasn't so successful...

Pro Tennis is an average simulation of that well-known sport (Pity there are no strawberries and cream!).

Challengers is excellent value for money on cassette. But with the disk version costing a staggering £22.99 I would be inclined to stick to cassette.

Excellent value for money with a little something for all tastes! The two games that really stand out here have to be Rick Dangerous and Carrier Command.
Logout