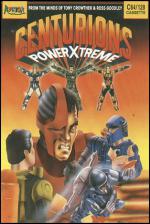 Doc Terror's out to destroy the earth, and The Centurions - fresh from a successful cartoon season on BBC TV - form the only force that can stop him.

Beneath their powerful exoframe body armour, studded with special assault weapon systems, these highly-skilled super troops are all too human. Ariolasoft estimates that the exoframes give The Centurions the power of 1,000 men with machine-like dedication. The three-man team - codenamed Earth, Sea and Air - will need all their extra abilities to defeat Doc's robotic minions.

Doc's plan is to steal a lethal nerve gas. It's hidden at the centre of the high security complex, protected by a myriad of locked doors. Your team's job is to find the correct keys, gain entry to the complex, find the chemical and keep it safe.

You'll have to use the whole team as certain areas, in which keys are kept, are off limits to all but one member. Keys are placed on plinths within air black, sea blue and land yellow areas. Only the corresponding member of the team - Air on Air, Land on Land - can enter those areas. Once you've picked up a key you race around the entrances to the security complex looking for a door with a lock hole the same shape as your key. If you strike lucky the door disappears and you can enter the complex ready for a showdown with the Doc.

You can switch between characters in each of the three sections of the game by skimming your player over the air, land and sea icons. The player doesn't change shape when you change character but the name of the new character is put up on the status display on the lower third of the screen. That confusing? Well, it isn't because you'll know if you hit a no-no area. Your character's score takes a dive.

The scoring system is a little odd but, once you get used to it, you will see that Centurions can be played in one of two ways. The main score starts at 1000 and decreases when you're hit by a laser bolt or brushed by a monster. When the life energy level reaches zero, the game's over for the current character - but you can protect him for a while, at least, with armour which you'll find are carried by some of the creatures lurking around the play area. When you shoot one of these creatures, a flashing armour symbol appears in its place and, if you glide over it, your character is clothed with a new weapons system.

Each set of armour includes a different type of firepower. You'll be able to shoot walls of laser power, scattered bursts, and lines of zap as well as the normal rapid laser bursts. Each laser weapon is powerful in its own right but just make sure you don't let them off in confined space or you'll end up shooting yourself - and that'll lose you some important life energy.

Centurions transcends the normal arcade shoot-'em-up type of game while retaining instantaneous action and hordes of aliens who'll put up a quick fight if that's all you want. It's not the main aim of the game but Ariolasoft has included an alien kills score just in case you're not so hot at solving the key finding and mapping problems. That said, you'll need to play Centurions as an arcade adventure, which requires mapping, if you're to get the most out of it. If you want high scores it'll give them to you, if you're up to the Doc's alien barrages, but you'll need a steady, logical, strategy if you're to beat this superb game, and not just the monsters that inhabit it.

You'll need to play Centurions as an arcade adventure, which requires mapping, if you're to get the most out of it.