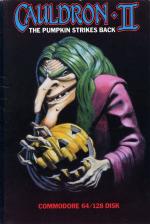 "...And it came to pass that the witch reclaimed the golden broomstick and rid the land of all the pumpkins... except one!"

It's taken well over a year for Palace Software to come up with a successor to the wickedly complicated Cauldron. But Cauldron II: The Pumpkin Strikes Back is well worth the wait.

With great graphics, sensational sound and gameplay which at times borders on being frustrating - but nevertheless addictive - Pumpkin is a winner.

In the original Cauldron, you played the part of a witch trying to rid her world of pesky pumpkins. In the follow up, the roles are reversed. The witch has pulverised all the poor pumpkins except one. And that sole survivor is out for revenge.

To complete the game, the pumpkin must collect a lock of the witch's hair and drop it into a bubbling cauldron. Sounds easy when you read it quickly. Of course, there are a vast variety of creatures to dodge or kill, puzzles to solve, and a whole palace to explore.

It's vital to master the bouncing pumpkin. The height of his bouncing is controlled by the Fire button. One of the nice things about the game is that it's quite good fun just bouncing around, without really getting anywhere.

Lurking around the palace are spiders and skeletons. These are deadly to the pumpkin. The witch's cackle when you lose a life is excellent. But, after a time you begin to resent it, but that just renews your determinations to beat the game.

Other creatures sap your magic. But you can top up on the potent powers by leaping on sparkles. These also give the ability to do a bit of zapping.

Also watch out for the dismembered hands lurking around. Touch one of these and your joystick controls are reversed. That's sneaky and very confusing when it happens.

To complete the game, there are six objects to be collected. The goblet will restore normal joystick control after a brush with the hand. The axe will allow you to open closed doors. Then there are scissors - vital to snipping off a lock of the witch's hair. The crown will come in useful when - or rather if - you manage to find her bedroom. It will protect you against the "guard magic" protecting her. A shield is necessary to defeat the skeleton guarding the cauldron.

And finally there is a Book of Spells. The book doesn't actually do anything in particular but you have to have it to complete the game.

Conversions are on the way for the Spectrum and Amstrad, so most people will eventually be able to enjoy this delightful game.

With great graphics, sensational sound and gameplay which at times borders on being frustrating - but nevertheless addictive - Pumpkin is a winner... Don't delay, buy it today.