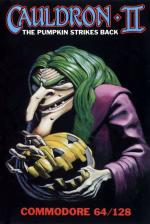 Remember the old hag from Cauldron? In those days she was quite a nice old dear, not like the horrible, bloated Pumpking who ruled the woods. He wasn't very nice. In fact he was down right evil. So evil that he used to put cute little kittens in pickle jars end drop them from high buildings. So evil that he once deprived all the rabbits in the wood of their buck-hood just to pass the time. But Witchy-Poo managed to put an end to such wicked cavortings -- she gathered six ingredients, made a spell to distract the Pumpking and while he was preoccupied she stole his Golden Broomstick. With the power of the broom she banished the porky vegetable and all his minions, forever.

Well, not quite, since there was a survivor -- a little pumpkin who guarded the Pumpking prior to his demise. But this friendly little fellow wasn't horrible and evil -- well, not much, he just had a rotten childhood, got in with the wrong people and was misunderstood by his social worker. Anyway, once the fatty Pumpking had gone, the small pumpkin soon changed and showed everyone what a nice chap he really was by helping lots of grannies across the road, and made people happy by recovering their stolen £5 notes -- that sort of thing.

Unfortunately though, the power generated by the Golden Broomstick perverted the goodliness of the Witch and she became warped and evil. She ordered all the little creatures of the forest -- you know, the cuddly ones with big dewy eyes that Walt Disney made famous -- to build her a huge castle in place of her dilapidated old cottage. She invited a horrible entourage of creatures to move in with her, and nobody dared go near the joint. The Witch's domination was now supreme.

Until one fine sunny day in late April, the little pumpkin learned of the Witch's whereabouts. 'Ha! She doesn't scare me,' he squeaked at the top of his little pumpkin voice, and he decided there and then to put an end to the oppression, and show everybody what a jolly nice pumpkin he really was. So, off to the Witch's castle he sproinged. Sproing, sproing, sproing.

The Hag's abode is a large castle consisting of 128 rooms, all filled with horrible things out to do damage to our edible hero. The game is viewed and played in flip screen fashion as the pumpkin moves from one location to another. The pumpkin has a novel method of locomotion -- he bounces! He can perform three different heights of bounce: little sproingy ones, middle size boings and huge great seven league spadoings. Normally he sproings though, but pressing the fire button causes him first to boing then spadoing, useful for negotiating some of the chasms and nasties around the castle.

The castle's decor is pretty questionable -- but then what do you expect with such a vile and evil despot ruling it? -- and there are several pieces of furniture and masonry to negotiate. There are also plenty of nasties to avoid, or shoot, such as goose-stepping skeletons, hunchbacks with large clubs, floating spikey balls, hammers, mice, knives, spiders and grasping hands. If any of these creatures hits our effervescent friend, he loses energy (shown as 'magic' at the top of the screen), but touching a spider or skeleton kills him outright, and touching a hand reverses the joystick controls for a few seconds. With each loss of life the Witch cackles mercilessly. Also worth avoiding are the ends of spears, axes and lit candles, as touching them results in the loss of a life and even more merriment for the Witch.

Fortunately there are energy spots scattered about the castle, and these restore the pumpkin's energy when collected. They also give the heroic veggie the ability to fire bursts of energy at the marauding baddies, but at the expense of deploring his magic by one unit. Adorning the exterior of the castle are Gargoyles (not the ones who write games in Dudley), holding stone platters. If the little fella bounces onto a tray to collect an object and doesn't bounce back quickly enough, the gargoyle tips him off and he plummets to the forest below. Fortunately it doesn't cost him a life, just some energy.

The game starts at one of four locations, but no matter where the pumpkin starts, he can only complete his task by collecting seven different objects. Dotted around the castle are six items: a book of spells, a goblet, a crown, an axe, a shield and a pair of scissors. These give respectively the ability to complete the game, immunity from the marauding hands, immunity from the nasty guarding the Witch, the ability to open doors, defence against skeletons and finally the ability to cut the Witch's hair. When all of these things are in the pumpkin's possession, along with the lock of Witch's hair, he can go down to the bowels of the castle and dump everything in the cauldron found there. Doing so will break her evil spell and everyone can live happily ever after -- how nice.

There's certainly a glut of excellent arcade adventures this month, so it's a case of making your mind up about which one to buy. This one is very good indeed, with a highly novel control method as you boing around the Witch's castle. Like its predecessor it's a very difficult game which proves to be immensely tricky to solve. This difficulty doesn't detract from the game though, and the whole experience is very enjoyable, though frustrating. The graphics are brilliant, with lots of nasty characters trolling about the place, and the sound effects are also great.

Palace Software's latest is immediately playable and it's mainly due to the really neat control method of the pumpkin. Bouncing and boinging all over the place is great fun, and though it's a little awkward at first, quite a large amount of fine control is possible after a bit of practise. The game itself is very good, offering a fair amount of challenge even to the better game players. Graphically everything's tickety boo and very pretty in places. The music is also of a pleasant quality, as are the sound effects. Cauldron II is worth a look at next time you're down the computer shop wondering what to buy -- I'm sure you'll be impressed.

Cauldron II is cool. It is a well thought out and polished game, and a great deal of care and attention has obviously gone into it. The title sequence is neat, as is the title screen music (even though it is quite short), and the whole thing creates a film-like atmosphere. The game itself is great fun to play, although it is very hard, and it will take a long time to solve. Cosmetically, Cauldron II is beautiful. It contains some superb background graphics and the sprites are delightfully defined and animated. I especially like the way the pumpkin bounds about the place with a manic grin spread across its 'face'. Cauldron II looks good, sounds good, and plays even better. Miss it and you'll regret it.

Graphics 96%
Wonderful representation of the castle, with lots of well drawn and animated nasties to be seen.

Sound 96%
Short, but neat tune on the title screen, and superlative sound effects.

Lastability 93%
A difficult, but enthralling game which requires lots of perseverance to complete.

Value For Money 94%
A quid cheaper than most games, and it's ever so good.

Overall 94%
Should appear very high on the arcade adventurer's 'must have' list.

A difficult, but enthralling game which requires lots of perseverance to complete.