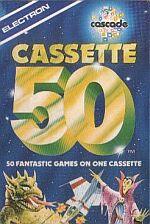 In 1984, when games for the 8-bit computers were scarce and rather overpriced, you can imagine the scene at Cascade. "I've been working on a game in BASIC," said a feverish employee. "It's called Sitting Target and it improves your reaction times." Back came the answer: "I've made one as well: High Stakes, a computerised version of Roulette." Then, after much gleeful rubbing of hands, a very wise man said, "I've had a look at the computer market recently and every Tom, Dick and Harry is either releasing crap from their bedroom or putting together their own book of listings. Do you know what we should do to clean up this Christmas? We'll take these two half-decent games you've put together and, over the next few days, I want you to write another 48 programs. They don't have to be good. Heck, they don't even have to work! But instead of risking your two very basic hobbies as a full-blown release, I'm thinking of Cassette 50!"

I do not think this supposition is very far from the truth. The tape was in fact Cascade's one and only release, and it came out on every computer from the ZX81 to the Commodore 64 with the same tag line - "50 Fantastic Games On One Cassette". On the Electron, this is actually a fallacy as you only get 48 games, the last two being inexplicably missing. Believe us, the games are anything but fantastic. The majority of them are truly, truly awful - rushed out with dodgy collision detection, keyboard combinations, spelling errors, and even Mode 7 inclusions direct from the BBC versions!

The tape has been locked in the archives of Acorn Electron World for a good few decades, deemed 'very low priority' for transfer to disc. However, as 2007 seems to be the year of the catch-up BASIC compilation discs (So far, 60 Programs For The Electron, Het Electron/BBC Boek and 40 Educational Games For The Electron) have been released this year), it has now joined them in the archives and is freely available.

We could launch into a rant about the problems with almost each and every game in turn so when we say that at least some of them are not too bad, pay heed to this context. Even the 'not too bad' games in this bundle are pretty bad! OK, with a heavy heart then, Sitting Target and High Stakes (which we mentioned above) are the games which have quite evidently had the most time taken over them. They are probably just about passable as an Electron User or Micro User type-in. There's also some other games which, despite being incredibly simplistic, are actually rather playable. Derby Dash is the whole 'make yourself bankrupt by betting all your money on the horses'. Attacker (a Bomber clone) is a monochrome version of the old favourite but where a bomb will destroy the whole of any tower block no matter what size it is.

Then there's Dynamite (a kind of Dam Busters style game where you must fling a bomb at a wall to flood the defences of the enemy) and Galactic Attack (which actually loads in two files because of its complexity).

So it's not all bad. But it mostly is. To give you a flavour of what to expect, try these complaints on for size. Long pauses for no discernible reason followed by a level beginning and requiring a keypress within a fraction of a second (Barrel Jump); hit two keys in quick succession, but the second key usually doesn't register (Cannonball Battle); move an X up and down (Evasive Action, also known as Ivasive Action by Cascade's editorial dept); move a 8x8 bucket from one side of the screen to the other and back again - forever! (Inferno); get told 'You are useless' (Hangman); remember a string of numbers (Ghosts, a Simon clone). What was going on in Galactic Dogfight we can only guess at!!

Most of the programs are too badly presented to be considered games, they are just the byproducts of idling away a few hours at a keyboard and seeing what was produced. One notable exception is the game Force Field, which is at least highly playable, even if Elbug's Space City is a much superior clone (In fact, the two look suspiciously similar, see above).

One last thing is that there is one game, Fruit Machine, which there appears to be some problems with - which is a double-shame, because it is the only program that actually contains machine code sprites!

The disc/cassette is what it is. But it is not the passage of time that makes its contents so lousy. It is more that you have to imagine that it's 1984 and you've just foregone something like Citadel and spent your £9.95 on it instead, believing you'd be bagging fifty games of the same calibre. But the games on Cassette 50 are the equivalent of the games submitted to Acorn Programs (which cost a tenth of the price). The games really are poor and the very few games that you might actually spend more than a few seconds looking at will also be forgotten more quickly than most.

The games really are poor and the very few games that you might actually spend more than a few seconds looking at will also be forgotten more quickly than most.
Create Auction