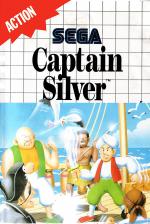 Shiver me timbers! Data East's ageing and obscure arcade game has just been converted to the Sega, and those responsible should be made to walk the plank!

The game is basically a variation on the Ghosts 'N Goblins theme, although it's nowhere near as good as the Capcom classic.

The player guides the sword-wielding Captain Silver across a horizontally scrolling landscape, avoiding the poorly-drawn monsters that attack from both sides or slaying them with a quick thrust of his stabber. When a corpse disappears, a letter or blue block remains, which is picked up for extra points and money. Later in the game, Silver is able to enter shops and buy items, including a shield (which allows him to be hit twice before he dies) and the ability to shoot stars from his sword.

The first level is set in a village. Get to the centre of the hamlet and the action switches to a ship.

Rigging is climbed to reach other parts of the ship, where pistol-toting seadogs jealously guard extra weapons, and the hold is entered by climbing down an available ladder. The Captain of the ship is found at the bow, and Silver confronts him in a duel to the death. If the black-garbed renegade is defeated Silver moves onto treasure island. Later still comes a platform section where Silver has to negotiate a series of moving floors.

The problem with Captain Silver is that it has all been seen before - it offers nothing new. The graphics are gaudy and unimaginative, the animation is amateurish, and the sound harsh. The gameplay is badly flawed, allowing you to get through the first three levels with complete ease, and then the difficulty level is bumped right up, making the platform section difficult to clear.

Those who have never played a Ghosts 'N Goblins-type game before might find this fun, but to be honest there are many better examines of the genre - try Alex Kidd or Wonderboy instead.

Those who have never played a Ghosts 'N Goblins-type game before might find this fun, but to be honest there are many better examines of the genre - try Alex Kidd or Wonderboy instead.