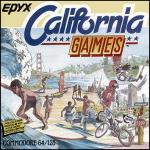 Another stunning addition to the Epyx "Games" series

Having given you the opportunity to participate in seasonal sports in the Summer and Winter Games series, and to travel to distant lands in World Games, Epyx now offer you the chance to go to California and take part in some of the World's trendiest sports.

California Games is the fifth in the "Games" series and boasts six new events. Those who've enjoyed the previous releases will recognise the non-standard options screen. This allows up to eight players to compete in all or some of the events, practise an event or view the record table (the disk version automatically saves the highest scores for posterity).

When a competition starts, all players input their name and choose a sponsor (there are nine, including Casio and Kawasaki) before undertaking the following:

1. Surfing The sport of the self-proclaimed Kings of Hawaii, surfing now takes place along the whole length of the California coastline. Now's your chance to shoot the curl, shred the tube or hang ten without even getting your feet wet. The screen displays the growing whitecap with your surfer lying on his board, preparing to catch the wave. Pressing the fire button sees the surfer stand up and begin his ride.

The aim of the contest is to ride the wave for as long as possible, while attempting to enter the curl itself.

Moving the joystick controls the direction of the board, and holding the Fire button down allows sharper turns to be made and also slows the board down - effectively allowing the wave to catch you, and allowing you to enter the tube itself.

A 'Wipe Out' is the term used for the premature separation of surfer and board. This occurs whenever you stray too far to the bottom of the wave and also, if you get caught in the tube itself. The ride lasts for one and a half minutes, and at the end of your efforts, a group of laid-back beach bums hold up score cards to tell you how you fared.

2. Flying Disk Set in a beautiful lakeside park, the frisbee event involves two people - a thrower and catcher. The objective is to hurl the disk to the catcher as accurately as possible. Points are awarded for the type of catch, either running, diving or overhead - and the less steps the catcher takes to reach the disk, the more the catch is worth. The player has three attempts to throw and catch the disk.

3. Half Pipe Become the most awesome dude on four wheels in this radical skateboarding event. A press of the Fire button signals the skateboarder to push off from the starting ramp at the top. Up and down joystick movements accelerate the skater as he oscillates across the half-pipe, and a combination of the Fire button and left and right on the joystick starts either an aerial turn, hand plant or kick turn, depending on the skater's position on the pipe when the joystick is toggled.

Careful timing is essential during a manoeuvre, otherwise the skater falls and is 'wiped out'. The player is given one minute and fifteen seconds or four wipe outs to complete as many stunts as possible. Go for it, and see if you shake the pipe enough to cause an earthquake (that wasn't my fault - that was San Andreas' fault).

4. Roller Skating The beach boardwalk is a dangerous place for a non-skater, and Californian skaters are the coolest around. Getting from one end of the walk to the other while staying cool and doing stunts is the task that awaits you in this section.

Your female on-screen counterpart begins at the far left of the boardwalk and has to traverse the length of the course, avoiding cracks in the pavement, grass, old pairs of sneakers and even flying beach balls. Repetitive movements of the joystick cause your skater's legs to move, while pressing the Fire button causes her to leap in the air.

Spins award you with extra points, and jumping spins over obstacles are awarded with correspondingly higher scores.

You are judged on the number and duration of stunts accomplished, and bonus points are awarded for the time remaining on completion of the course. There are a variety of jumps, burns and low bumps to be negotiated safely as well as rocks, tyres and logs which can unseat the careless biker.

Each player is allowed three 'easy' falls (i.e. running into objects and tumbling from your bike) or one 'serious' fall (where a stunt goes wrong and you fall on your head!).

Any further falls result in the end of the attempt, and the total score is then displayed.

6. Foot Bag Every Californian has a foot bag, or hackysack as they're otherwise known. These are small, leather-covered bean bags which are carried around and used in moments of boredom - such as when you're waiting in a queue to hire a windsurfer. In this event, the objective is to keep jiggling the bag for one and a quarter minutes using only your head, knees or feet.

The screen displays a front view of the player, who moves left and right, jumps and turns around. As soon as Fire is pressed, the player kicks the ball in the air. When the ball drops, the Fire button is pressed to make the player kick at it again. Timing and positioning is crucial - the player tries his best to keep the ball up, but if he's too far away, or kicks out late or early, he misses.

Sometimes I hate Epyx. They produce something seemingly unsurpassable like World Games, and you use every superlative in the book to sum up its brilliance. Then, a year later, they release California Games, to boldly go where no-one has gone before... and produce something *ever better*!

The gameplay is by far the best in the "Games" series, incorporating (and you'd better believe this) better graphics and animation and even more depth and variety than ever before!

There's no getting near the limits of the score within a few plays either. All events, especially BMX Riding, Foot Bag and the two Skate events, require an awful lot of practice before you even *start* scoring - developing your skills is another matter entirely!

California Games is quite simply the apex of computer sports gaming at the present time. Recommending it is a formality.

Gold Medals, it seems, are just like double decker buses - you wait all year for one, and then two come at once! Hot on the heels of Head Over Heels comes the superb new Epyx release, California Games.

Once again the American software house have exceeded both themselves and the limitations of the C64 to bring us another incredible - and somewhat laid-back - sports simulation. If you gather up all the superlatives from previous Epyx reviews and add them together, you just might go half-way towards describing California Games.

Again the animation and graphics are without peer, and the six separate games join together perfectly to form a single, unbeatable package. Just for the record, the Surfing is my favourite - fun to play, relaxing to watch and flawless in its implementation. I love it.

What an amazing package! Six events filled with fun and sun, just begging to be played each time you switch on your computer. The beauty of the beast is that all six games are of an equally high standard, so the only problem is trying to decide which event to take part in first!

Even in purely technical terms, Epyx have somehow managed to surpass their own high standards - the pictures and sounds generated by this program are atmospheric beyond belief. The multi-load cassette may cause a few headaches, but the amount of enjoyment to be had is so high that even this inconvenience should only seem minor. California Games is a real progression in the Epyx sports sim range - and surely there can't be a higher recommendation than that.

Presentation 96%
A superb array of options lacking only a restart. The multi-load cassette is long-winded, but works well nevertheless.

Sound 84%
An individual tune for each event, and plenty of atmospheric spot effects.

Overall 97%
Epyx surpass themselves yet again with another incredible sports simualtion. Don't miss it.

California Games is quite simply the apex of computer sports gaming at the present time. Recommending it is a formality.