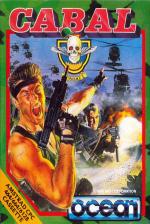 "Kill 'em!" That sets the tone for Cabal and is the option that starts the game. No beating about the bush here, it's a game that's based solely on one man's destructive power. Dropped behind enemy lines his mission is simple, mass murder on a scale to shame Jack the Ripper himself.

Cabal looks like Operation Thunderbolt for the under fives, but don't let that fool you. Cute carnage on a grand scale is just as much fun as the grow'ed up kind. This time your guy stands bravely/stupidly in view, able to run left or right but not away. A cursor floats about, moved by pulling the stick diagonally, and with limitless bullets you can just spray the screen as you line up each shot.

The scenes he fights over are small urban areas that get more congested with buildings and people as the levels progress. Luckily the little peep' can hide behind walls for cover and the bullets travel relatively slowly, so you can get out the way. As everything comes down and the action gets really heavy, the amount of lead in the air breaks every regulation in the Health and Safety Act. This has the unfortunate effect of demolishing most of the on-screen structures which you'd like to cower behind, so you've got to stand up for yourself and fight like a sprite.

The enemy soldiers come in three main forms, close, closer and too close! They sneak on from the side of the screen or out of buildings, in one of three ranks. The closer they are, the larger the target and the fewer the points but the more dangerous their return fire. So get your priorities right - you can, after all, only score points if you're alive.

To begin with Cabal is armed with a poxy single-shot gun, which ain't a lot of good if you want to lay waste to whole armies. Luckily, the chaps in green he's fighting have a sense of sportsmanship and occasionally toss him an much improved weapon. These are either grenades, a bazooka or a machine pistol - and then things really liven up. Grenades take out tanks and knock down buildings, bazookas repeat-fire, blowing away anything they hit, while machine guns are just wild. Your fire rate doubles and the shots are more powerful, but they only work for ten seconds before you run out of ammo. So bang away when you've got one!

Cabal has five lives to begin with and 12 grenades. There are another two lives on offer in the 'continue' credit after you finally die. Still, even this many miraculous recoveries are far from enough to let him finish his mission. because even when you've the measure of the troops there are the end of level vehicles to take out, and they ain't wimps. Helicopter bombers, tanks and even submarines are out to put a stop to your jaunt.

Cabal is an excellent example of a game of stunning simplicity, that's programmed well and therefore a joy to play. You wouldn't want to spend hours blamming away; your trigger finger couldn't take it! But for those moments when you want some fun that leaves the brain in neutral but takes the reactions to their limit, it's perfect. Understated graphics and simple sounds don't hinder the pleasure that comes from surviving against overwhelming odds - at least temporarily.

Cabal comes up with the goods. Armed with unlimited ammunition, machine guns, bazookas and grenades the bad guys don't stand a chance. Great fun when you're in the mood for a massacre, but not the sort of game to keep you enthralled for hours.

Great fun when you're in the mood for a massacre, but not the sort of game to keep you enthralled for hours.