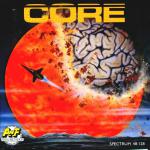 Is this Mission Impossible? Distress signals have been received from Eroc 1, a deep mined asteroid settlement. An alien attack is suspected.

Enter Commander Andrew Angello under orders to find out what has happened. But, on arrival, at the Asteroid, he finds all 720 service personnel are dead. But why?

Angello's only hope of finding out is to find the biological memory cells left on the asteroid, and re-assemble the parts to re-create the colony's memory.

By returning the complete "memory" to the mothership, a suitable defence strategy can be found to combat future alien attacks.

There are many objects to be found which prove handy for Andy. There are a number of tools - some hidden, some buried - which will help him.

Andy can travel around the mines by walking or using the anti-gravity lifts of teleports.

A display panel at the top of the screen shows direction, time and power. Descriptions and verbal prompts are also shown.

There are more than 1,000 locations in the game, split into four levels. A map is essential to get into the vast, complex and challenging game.

Thankfully, it includes a save game option. There's no way to complete this game in one sitting. C.O.R.E. will also be available for the Commodore and Amstrad.

A map is essential to get into the vast, complex and challenging game.