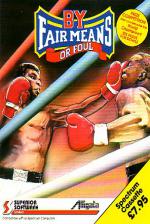 Issa great sport, knoworrimean 'arry? Two muscle-bound clods battering each other senseless until one has so much brain damage that he falls over (or starts doing ketchup adverts). By Fair Means or Foul isn't the first boxing simulation on the Spectrum - Elite's Frank Bruno's Boxing is back in the charts again as a budget re-release - but BFMOF is by far the funniest, 'cos in this one you can cheat.

Basically it's a one or two-player combat game, featuring a selection of fighting moves which, shall we say, don't all conform to the Queensbury Rules. The ring is shown in slight perspective, and the two boxers share it with a dodgy referee who does his best to keep things clean - when he's not nodding off.

You can choose joystick or keyboard control with definable keys, and before starting you lean choose any computer opponent (providing you have reached that level previously).

With the fire button you have eight moves available; move forward, duck punch (which makes you look like a gibbon), duck, low guard, move back, high guard, jerk back and head butt. Head butt!? Yes, it might be a foul move, but it's quite permissible in BFMOF. With the fire button pressed, you have the options of punch, upper cut, kick (another foul), groin punch (an extremely painful foul), body blow, low guard, knee and high guard. Control moves are reversed if your character gets in a clinch by moving too close to your opponent, and ends up facing right instead of left.

While the fighting moves are all pretty precise and useable, reactions are a little slow. Fortunately, on the early levels at least, your opponent is pretty slow too; the first fighter, Mild Martin, often stands quite happily while you punch and kick him to oblivion.

Oh yes, the foul blows. You can only get these in if the ref's attention has strayed. You can judge this from the colour of the silhouettes above the ring; red, no chance, amber, maybe, green, go for it. If you're caught making a foul blow, the ref will stop the fight and you'll be penalised.

Energy bars below the screen show your status; your aim is to outpoint each of six opponents to become World Champion, after which the action carries on with more and more vicious opponents.

The audience is just as rowdy as you'd expect from the sort of people who patronise the noble art; shown outlined against the ring lights, they cheer loudly at the end of each round, joggle up and down enthusiastically and chip in with a range of friendly comments. Other nice touches include the winning boxer punching the air, and the thump as a good blow lands.

There are plenty of good points to BFMOF; the wide variety of fighting moves, the decent sound effects and music, the comments from the crowd ("C'mon Pansy!") and the ref, and so on. It isn't quite smooth or novel enough to make you scream with joy, but it will pass a few pleasant hours of head-punching.

It isn't quite smooth or novel enough to make you scream with joy, but it will pass a few pleasant hours of head-punching.