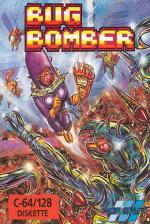 Oh no! Disaster has struck and the Zzap computers have been taken over by all manner of beastly beasties. We miniaturised Mark "Bug Blatter" Caswell and sent him into the office Apple Macintoshes. What he found wasn't pretty (a half-eaten cheese-and-chutney sarnie stuck in Phil's keyboard, for one thing!), but we'll let him take up the story...

We've all heard of the computer viruses that nasty pirates bung into computer systems. The Michelangelo virus was the last one to hit the world - activating itself on the birthday of the famous painter, no less (courtesy of Corky Crap Info Inc). It corrupted hard disk drives and in one place started to play Barry Manilow songs [Agggggh! - Phil]. In this game, nothing quite so drastic happens (with apologies to BM fans... not!) , but it's serious enough. A band of infamous 'bugs' have penetrated the main computer and are threatening to paralyse it (with a few choice Des O' Connor tracks).

So it's down to you and up to three pals (making... errm, a maximum of four people in all) to travel through the computer and eliminate the threat. There are four characters on offer, and so you don't get confused as to who's who, they're colour-coded (just like Charlie's XR2!): Punky's red, Martian's green, Jailbird's blue and Neando's yellow.

Options are plentiful. For a start, there are two distinct types of game: versus the computer (cooperating with other players) or the opponent mode (each man for himself!). The latter incorporates an adjustable number of computer bugs (whose intelligence can be varied) and comprises bouts won by the last surviving player. Both modes can have up to four human players, controlling their characters with either four joysticks (with special adapter) or two sticks and two on keyboard. There's also a handy password system to access every tenth level.

Phew, I'm knackered after that explanation, but we can finally get to the game. The play area is a large square split into loadsa smaller squares, and the peace doesn't last very long 'coz the bugs are soon on the scene. Of course, the ultimate aim is to destroy all other creatures on the board (both human and computer-controlled). How do you do this? Well it's easy peasy (where've I heard that one before?)! By holding down the fire button and moving the slick in one of the four compass directions, various weapons and handy icons can be accessed, including laying eggs which hatch out into useful creatures. However, using weapons and laying eggs costs valuable energy (Doesn't it always, eh?) - if it gets down to zero, you're a goner.

It takes a couple of games to fully understand the rules of Bug Bomber (if you're a thickie like me), but after that you can't put the joystick down. Like all multi-player games, this is best tackled with at least one pal, where you can either cooperate or kick the s@%* out of each other.

Words can't describe how playable Bug Bomber is, you'll just have to take my word for it or play it yourselves (I know that's a cop out but I'm running out of review space). On par with the playability are the graphics: small but wonderfully animated sprites charge around the screen in a psychopathic frenzy (just like me - Phil 'kinky' King!).

Bug Bomber is a difficult game to describe, but it's a hell of a lot of fun to play, believe you me!

Block: Dropped to block a passage, usually to stop an enemy chasing after you.
Bomb: Detonates shortly after being dropped (get out of the way or you'll lose energy!). Useful for destroying obstructing blocks, mines and opponents' eggs!
Thunderbolt: Automatically fires towards any enemy in same line. If no enemy is found, it disappears after a few seconds.
Mine: All mine! Explodes when an enemy walks over it, or after 10-30 seconds.

Go To Work On An Egg

A creature hatching out from an egg has an intelligence relating to its layer's IQ - increased by collecting the 'IQ+' icons which appear. Five different types of egg can be laid to produce vastly different hatchlings.
Energy: Gives additional energy in opponent mode. Can be stolen by other players!
Painter: Changes other players' eggs to your colour.
Cruncher: Destroys blocks of your own colour.
Hunter: Pursues other players and creatures. Always selects strongest opponent to attack.
Killer: The most dangerous being, it looks like a tank and can lay its own thunderbolts.

Presentation 92%
Loadsa options, best of which is the four player mode.

Hookability 87%
Help, my hand is stuck to the joystick.

Lastability 88%
Put a pot of coffee on the boil, we'll be a long while!

Bug Bomber is a difficult game to describe, but it's a hell of a lot of fun to play, believe you me!