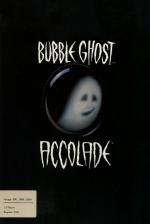 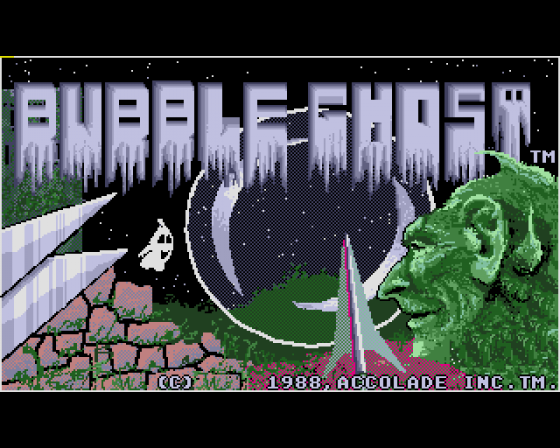 A quick haunt around that cosy castle, a nifty screech at its occupants and a bit of telekinesis in a set of spotted designer sheets is all you'd set your heart on. "It'll be a laugh," you thought to yourself, "appearing at windows, sticking an axe through my leg, carrying my head in my arms, walking around in suits of armour, letting rip with bloodcurdling screams - well rad". As it turns out, a laugh is just about the only thing you didn't get. A shame, because you got a lot more than you bargained for.

When the window you climbed through slammed behind you and the nasty rain was shut out, even your spectral form couldn't pass through it again. There was... are you sure you're ready for this? It's not very nice... OK, brace yourself... (da-da-daaa!) a wickedly nasty, horribly bloodthirsty, incredibly bad (urggggh!) *evil force* living in the haunted castle (Boo, hiss!).

Brian the terrible (and he really is terrible, you can't get much more terribler than Brian) has done a job on you good and proper. As if being a right nasty piece of work (and ugly too) isn't enough, he's nicked your eternal soul. Not that he wants to do anything with it; one look and he's totally bored. Brain would much rather tear a chicken limb from limb. In fact, he's just plain cruel (probably tore the legs off spiders when he was a kid) and leaves it bobbing tantalisingly in front of you, suspended in a soap bubble (the rotter!). 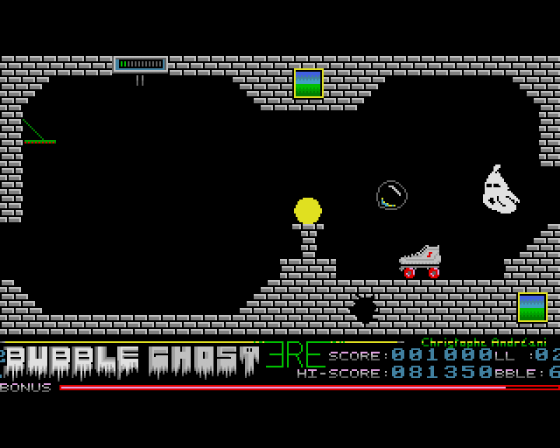 You're a ghost (but a very nice one, honest) so you can't exactly grab hold of it: touch it and your hand just goes right through. There's nothing for it - you've got to find another way of taking it with you when (or should that be if?) you escape.

So what can you do? Think, think, think, scratch your head a bit, think a bit more, summon up your guardian spirit... oh no that's in the bubble... eat a banana, take a bath, blow - yeah, that's it - blow the bubble about! Dead (geddit?) easy!

Dead easy my bottom! You have to flip around the bubble, huffinf and puffing and following it about. And you've got to remember - this is the home of an evil spirit (Boo, hiss - really loudly this time), so there are plenty of traps littered all over the shop: nasty impaling spikes that pierce the bubble, evil-looking heads (haven't they got any manners staring at you like that?) which block your path, fans to blow you off-course and burning candles - and you know what happens when a bubble crosses a candle flame, don't you? 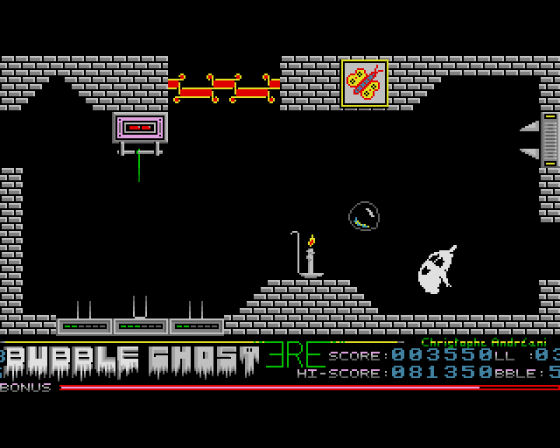 But don't forget that bubbles aren't the only things that you can blow about (kyak, kyak! Quiet at back, missus!). After all, what happens to candles when you blow at them?

Anyone who thinks that computer games are lacking in imagination or originality at the moment would be forced to change their mind after playing Bubble Ghost. 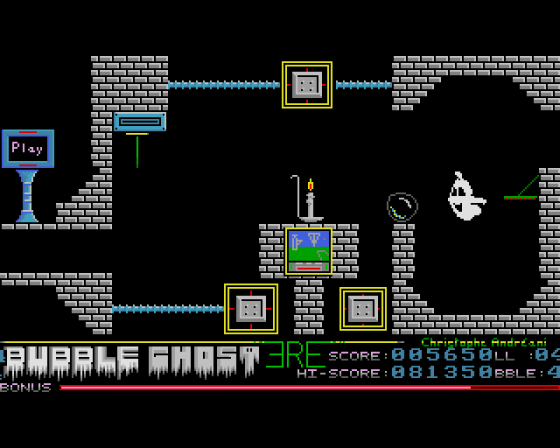 The concept of a ghost blowing his soul around a castle full of spiked objects is just so-o-o weird! Having said that, I have to stress that it's great fun to play, each screen requiring even more dexterous mouse handling than the last - things get very tricky on the later levels.

A special mention must go to the game's use of sound, which comprises a catchy title tune (which Maff informs me in "well atmospheric") and some humorously appropriate sound effects, such as the ghost's hacking cough when he's made to blow for too long.

If your software collection is crying out for something different, Bubble Ghost is just what you're looking for.

Fans of the cute and curious, take a look at this! Bubble Ghost is one of that increasingly rare breed, the totally originally game. Furthermore, unlike many such oddities, the gameplay is not so way oout that the player is left confused as to what's going on.

In fact, the idea is very simple but success demands quite a bit of deft mouse-manoeuvering, especially as you progress to the later halls. The practice option is very handy indeed, but the game would benefit from a level select system.

The early halls are too easy to provide a lasting challenge so it becomes slightly tedious to have to negotiate them to get back to where you were last game. But why am I being so pernickety when a game is as much fun as this? Erm, I don't know, now you come to ask...

Whenever I play games that have been converted from one 16-bit machine to another, I always think "What will be different?" "Will the gameplay be as good?" and other equally fascinating things [We get the general idea, Maff - Ed].

I've played Bubble Ghost on the Atari ST a few times, and these questions cropped up when I loaded up the Amiga version. Luckily, there was nothing to worry about. As soon as the impressive title screen appeared, backed by the amazing music, I realised that the programmers at ERE had used the extra power of the Amiga to good effect.

The game itself had lost none of the addictive qualities of its Atari incarnation; in fact, I'd say that the wonderful sampled effects make it even better!

I know it may not look so great in the screenshots (and it's not that exciting to watch someone else playing) but when you have a go for yourself, that's when Bubble Ghost comes into its own.

Lastability 86%
Once you get used to it, the game may seem slightly easy but most players will take a while to get through all forty rooms.

Overall 88%
An enjoyable and amusing game which many gamers will find a bit of a larf.

An enjoyable and amusing game which many gamers will find a bit of a larf. 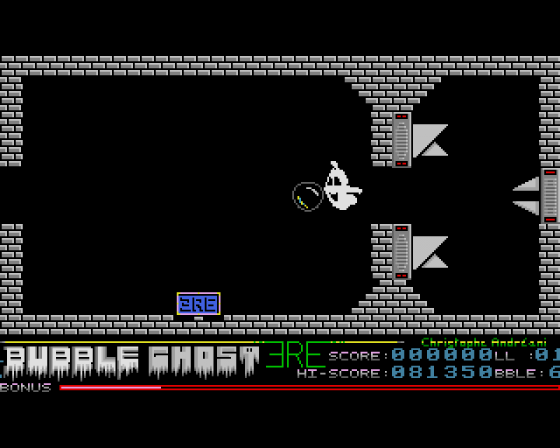