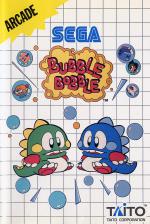 It's not an easy life, y'know. Take Bub and Bob, for example. One minute, they're their normal selves, the next they're bubble-blowing dinosaurs! Who could have performed this dastardly deed? Only the not-very-nice Baron von Blubba, that's who. To regain their human forms, the two dayglo dinos have to travel through 100 levels of madcap platform action and confront and destroy the Baron himself!

This is by no means an easy task, though, as the Baron has his hordes of minions waiting to dispose of any bronto that might get too big for its bubbles, and each has its own way of dishing out the devastation.

The bad guys don't have it all their own way, however - they can be blatted by blowing a bubble at 'em, then butting the bubbled beastie (try saying that after a few barrels of Old Flatulence Bitter)!

As the dinos progress through the game, the screens get tougher and tougher, and the enemies increase in speed and intelligence So you'd better give your bubble-fingers a work-out!

Baron von Blubba has foolishly left a variety of items scattered around each of the levels, which bestow the two brontos with special abilities:

2. Teapot Gives "Super Bubble Up", an instant version of all bubblegum power-ups.

3. Umbrella Teleports one or both players several levels. Handy on sticky levels that would otherwise be nigh-on impossible to complete.

4. Lightning Bubble When burst, this releases a blast of lightning which flies across the screen Any baddie that stands in the way gets fried and turned into a diamond!

5. Water Bubble Burst this to give you a water-ride you won't forget in a hurry - and it takes out baddies too!

Bubble Bobble may be about a million years old, but there must be something in it because Sega have finally chosen to convert it to the Master System. The graphics are quite jolly, although there is some horrendous sprite flicker near the top of the screen when there's a lot going. Sound is likewise funsome, with a faithful rendition of the original candy-floss theme tune. Following this trend of arcade-perfection, the gameplay has also been faithfully retained. The whole thing is a veritable bubble fest, with loads of jumping, cobbing and general bubble excitement for the taking, and even the fact that it has infinite continues doesn't stop it from being a fun-filled feast.

Featuring weirdo action, supercute sprites and maniacally addictive gameplay, Bubble Bobble is one of those classic arcade games which never seems to lose its appeal. This conversion is great to play, and features a beautifully graded difficulty level which starts out easy and just gets tougher and tougher - some of the later levels are incredibly hard - especially when you lose your power-ups! And if that's not enough, the simultaneous two-player action of the original has also been included, which adds even more to the lasting appeal! If you're looking for a brilliant game that'll keep you entertained for months, look no further than this.

Presentation 88%
Excellent, with one or simultaneous two-player options and a neat password system.

Graphics 80%
Nice, chunky and colourful, if a bit flickery at times.

Sound 57%
The same tunes and effects as the original coin-op performed by the Master System's sad, weedy sound chip.

Lastability 85%
Literally a ton of levels, and it gets VERY hard later on!

Overall 85%
A brilliant conversion of a classic coin-op that's just as horribly addictive as it was five years ago. Go get it!

A brilliant conversion of a classic coin-op that's just as horribly addictive as it was five years ago.