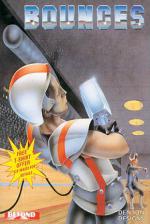 After much debate, deliberation, change of owner, employer and management, Beyond has finally decided to released the now fabled Bounces. Written by Denton Designs, Bounces is a futuristic entertainment used as an opiate for the masses. It's a sensible and noble sport which involves being connected to a wall by a huge rubber band whilst wearing friction-soled shoes in a special arena.

Within the Bounces arena a slugdomium ball moves around in a very low gravity way, and it is the way it moves, or rather the how and where of its movement, that decides the outcome of the game. If it flies into your goal then pointwise you're worse off for the experience. Conversely, a ball in your opponent's goalmouth is just the sort of thing that wins points. Of course the path that the ball takes can be changed and manipulated by the player, and through clever slugdomium slug control, goals are scored.

As well as using the great big laccy band and friction shoes, both players are equipped with a snatcher. Attached to the players game hand, it serves two purposes: used as a scoop it can snatch up the flying sphere and throw it out at high velocity (the subtle use); less subtly, the snatcher can be used as a weapon - just raise it above your opponent's head and bring it sharply down onto his cranium. This tends to befuddle the wits of your opponent, causing him to fall over - another point-winning activity.

The arena is viewed side-on and the play area occupies the middle part of the screen. Two sets of three different goals are in the ceiling, one set above each competitor. For the computer version of the game two real life heroes have been digitised from the future arena: Erik the red and Sir Ashley Trueblood. Both are easily distinguished as a very large part of this future sport is showmanship. Erik is in full Viking attire while Sir Ashley is decked out in a complete 14th century knight's suit of armour.

A joystick is used to control your player and a number of moves are available during the contest. On a fundamental left, right basis the stick can move a hero left and right, although the elasticity of the stretchy band that tethers him to the wall limits the field of movement. Stretching the band too far by walking away from the wall can cause problems when retreating, as the tension in the rubber can make your hero slide back at an alarming rate. Bash into the wall and he'll lay on the floor in a huddled heap, and points are lost.

Bouncing a ball off an opponent's skull is not an illegal move but a low down trick; nevertheless it's a very handy tactic indeed as it knocks the poor chap to the ground. Falling to the ground has two results: 1) it gives points to your rival and 2) it saps your stamina. Stamina is shown on a bar underneath the arena itself and the bar grows if a player stands around resting. Troll about, get knocked over and lob a few balls about and your player's stamina quickly gets into overload. Paralysis sets in while a player's stamina bar is in the red and his opponent is presented with a handy opportunity to score points until the bar creeps back to the yellow and movement is restored to the tired player's limbs.

Different point values are awarded for plonking the ball in the different goals, and bonuses are awarded for bashings that you inflict on the other player. There are two halves to each match, each half lasting 90 seconds. The winner is, logically, the one with most points at the end of the bout.

Bounces is one of those games that is very simple but great fun to play. Although the screen display only consists of two sprites and little else, the graphics are of a high standard - both characters are well drawn and they move convincingly. Bounces plays very well, especially with a second human player, and it is a game that I can wholeheartedly recommend buying, even though it seems a little expensive for what it is.

At first Bounces looks pretty crummy, but once you get into it you soon realise that although it's a simple game, it's great fun to play. The game really comes into its own when played with another human player - it's a real laugh when you start bashing and firing the ball at each other. For what it offers it's a bit pricey, but that doesn't mean it's not worth buying, as it is very enjoyable to play.

There's only one real objection I've got to Bounces and that's its price tag. Although it's a very neat game, £9.95 is too much to ask. The game is good and despite the simple appearance, a lot of thought has gone into the design. The one player game is OK, but the two player game is excellent - it really is quite funny. The graphics are alright and so is the music, although it is very Dentonesque and there are similarities to other Denton soundtracks - the Bounces tune sounds like a faster version of the Shadowfire theme. Overall, a good release which is unfortunately overpriced, but definitely worth a look.

Presentation 88%
Sensible screen lay out and lots of useful options.

Graphics 80%
Great sprites and character set, but that's all there is.

Sound 78%
A pleasant remix of Shadowfire.

Lastability 85%
The two player mode offers the most challenge, but the one player option is still quite tough.

Value For Money 79%
Seems overpriced for what it is...

Sensible screen layout and lots of useful options. The two player mode offers the most challenge, but the one player option is still quite tough.