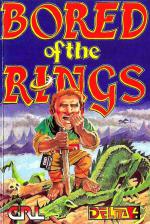 Timing is a great thing in the software industry and CRL seem to have hit it about right with their new adventure.

Following hard on the heels of Melbourne House's Lord Of The Rings, Bored is like a breath of fresh air.

Parody it may be, but it is true to the gist of the story. The events follow book order but the details are amusingly twisted to make this far better than its precursor. Spectrum owners who are casting a casual eye over this review may be wondering why I am reviewing a game that was released last year. The reason is that this Commodore version has been a long time in the making.

The game was written using The Quill and is in four parts on a single cassette. As the game commences, we find Fordo, the Boggit, attending his Uncle Bimbo's farewell party. Soon other important characters are introduced: Grandalf the wizard, Apam, Pimply and Murky.

The last three are Fordo's constant companions on his long journey to the land of Dormor to bravely deposit the Ring where the evil one can't find it. This is put succinctly by a down to earth Grandalf, "...and so we'll need to get some dense lemming to take it and dump it where old eyeball can't get it."

The ancient eastern runes on the Ring display the legend "Made in Hong Kong" and so we can see it is a ring of great power whose value is immeasurable.

Pursued throughout the tale by the Black Riders with a flatulence problem, Fordo must leave his comfortable home in the shire for the dangers of the outside world.

To complete the adventure a knowledge of the book is both a help and a hindrance. A mere glance at the map of West Middle Earth reveals the trendy nature of the new story. Here we see the Land of the Personal Stereo-wearing Goblins, the Land of the Silent Ghetto Blasters and an airport at the foot of Mount Gloom.

An interesting feature is the Land of the Cruel Reviewers which squeezes into the edge of the map just beside the railway line. We well-meaning folk are mere guides through the forest of hype which is nurtured by the men of PR land. We are humble freedom fighters on the side of the common man is my opinion. Never a cruel word of criticism ever passes my typewriter.

One thng I really hate, detest, abhor, abominate, dislike (and all other powerful synoyms from my Thesaurus) about this program is the way it uses drugs as the brunt of its humour. A junky Tim Bumbadil with syringes spilling out of his pockets is currently an image of pity not humour. Barrel-scraping wit is not required in this adventure especially when the humour in the rest of the story stays on the right side of good taste. I much preferred the image of a rapping, body popping Barrow Wight or the evil hordes of heavy metal fans.

The problems set in the adventure are as challenging as any I've met elsewhere. The element of wit makes this as much fun as Hitch Hiker's Guide, though the problems lack the complexity which makes the Guide such a monument to the adventure genre.

One day I may reach the final part of this wonderful wonderland and be able to find what Sceptical is all about. Until then, I'll boogie on through the text and graphics until I reach my goal. Bored we may be, but boring this ain't.

Bored we may be, but boring this ain't.