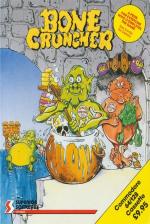 Meet Bono, a friendly dragon who would make Arthur Daley proud. He lives in a seaside castle and is on to a nice little earner by making soap for the monsters who bathe in the waters around his home.

His business partner, Fozzie - who's a green elfy-thing and not a bear - will help you collect the skeletons you need to make the soap and protect you from the evil monsters which inhabit the lower reaches of the castle and could kill you during your bone-hunt...

Okay, that's the cute scenario finished. Now, on with the game which is a load of dross - and after seeing Superior's Zarch I'm surprised the company could let its standards drop so low.

There are 22 maze sections in the castle, each one of which has a set of increasing dangers. Bono needs five skeletons to make a bar of soap in the cauldron which he keeps close by. Each castle chamber contains at least 25 skeletons and you need to make five bars of soap before you can progress to the next part of the castle. Once you've made them, you must deliver your goods from the castle rampart to the bathing uglies waiting in the water below.

Your path through the chambers in seach of bones is hampered by the most flat-faced, boldly drawn monsters I've seen since the days of low resolution BBC Model A arcade games - how low you can get. The slime-slicked walls and floors are also infested by spiders who like to eat skeletons, and Glooks, which will follow the smell of soap but are ultimately harmless.

Glooks can be used to bait traps for the evil monsters which will kill you on sight. Just use the bar of soap you're carrying to manipulate the Glooks and the marauding monster into a corner or against a wall. The monsters suffer from hydrophobia and, if they can't move they die.

Alternatively, you can rely on your buddy Fozzie to keep the monsters and spiders at bay. He sticks around you through thick and thin and will hold back monsters while you pass through evil-inhabited passageways. He's not invincible, though, and you may have to give him a gently push to get him going after a monster or spider's battered him senseless.

Monsters can also be destroyed if you force them down trapdoors. Some monsters may also be trapped in the sticky castle earth, but you shouldn't leave them there because they could escape. Remove the earth and use the Glooks to bung the beastie down a trapdoor.

The most exciting part of the game package is the badly drawn cartoon on the back of the instruction leaflet. It makes up, in some ways, for the baby graphics and the antiquated BBC-Superior thinners of the game.

This is a load of dross... I'm surprised Superior could let its standards drop so low.