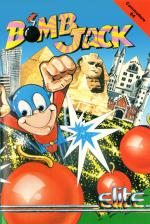 Bombjack is a super powered hero who has dedicated his life to truth, freedom and defusing bombs. Unfortunately the inhabitants of his cosy world are far from benign, and their favourite occupation is hassling and harassing Mr Jack. Their touch is deadly and contact with any of them snatches away one of the three lives supplied for his superheroing activities.

In his quest to dispose of bombs, our superhero is far from parochial, travelling around the world to continue his quest. There are five different locations, each containing a backdrop depicting a famous place. Each screen contains twenty four bombs of the traditional 'bowling ball with a bit of string on it' type. Whoever made these explosive devices was not exactly skilful, since they never ever explode, no matter how long they are lit.

Bomb disposal is Jack's hobby and the little chap sproings around platforms on the screens, gathering up the explosive devices as he does so. The little caped crusader can leap into the air and move left and right with a press of the fire button and a push up the joystick. Bombs are collected by travelling over them, and when the first bomb on a screen is in the bag another bursts into life. It doesn't really matter if you don't run straight off and get the active bomb, but if you do, a bonus is awarded. Collect twenty three bombs in the active state and a whopping 50,000 bonus points are added to your score. Once all the bombs on a screen have been collected. Jack materialises in the middle of the next exotic location.

Each screen consists of a pretty scene with the bombs and platforms overlaid. Jack can't jump through the platforms but he can run along them. He is governed by all the proper laws of gravity and if the miniscule chappy takes a bound into the air then he also has to fall down. Repeated bashings on the fire button cause him to drift down at a slower rate. Pushing up on the joystick while sproinging skyward, puts the little sprite into turbo jump mode and pulling down with the fire button held down curtails the super hero's sky flying activities.

This is all well and good but there are evil creatures terrorizing the little fellow. The first and most fundamental nasty to beware of is the screen patrolling bird creature which roughly homes in on your position. Luckily it moves slowly and has a little brain which is easily outwitted. Then there are the robotic creatures who enjoy a life cycle fed by kinetic energy. The longer you spend on a screen, the quicker the baddies arrive. Robots appear in the top left hand corner of the scene, materialising in mid air with a bit of an explosion to drop onto the nearest platform. The mechanical monsters trundle left and right along their landing platform for a while and then decide to walk off the edge. When a robot hits the ground the kinetic energy built up during the fall transfers the metal meanie into an airborne creature that's all the more deadly. Rotating balls and vicious snails also zoom around the screen trying to wipe your hero from the face of the game.

The nasties don't have it all their own way, however. Every so often a disk bearing the letter 'P' arrives in the playing area heralded by a continuous siren wail. Jumping through this power pill immobilises all the nasties on the screen and turns them into smiling faces. Points are awarded for leaping through a disabled nasty, which is conveniently eliminated as you do so.

A magic button with the letter 'E' emblazoned on it adds another life to Jack's supply when collected, and a Bonus button 'B' adds points when collected and increases the value of subsequent bombs gathered up on that screen.

I've only played the arcade version on a few occasions, so I can't really comment on the quality of the conversion, but even so, it is obvious to me that it is graphically and sonically very inferior. Not that it could be as good as the original, but it could most certainly be better than it is. Bombjack on the 64 doesn't play too well, mainly due to the size of the sprites - they are too large and restrict deft movements. The game becomes very frustrating to play because of this, and I soon gave up altogether. The characters and backdrops aren't very well drawn either, and the colour scheme used makes the game look bland. Bombjack could have been better, but as it stands it is rather annoying and not very interesting to play.

Oh dear, what a complete and utter mess. Playing the arcade version of Bombjack happens to be in my lop ten of 'fun things to do', but, unfortunately. Elite's interpretation is awful and doesn't look, sound or play anything like the original. The graphics and music are awful, the former being very fat - even pregnant looking - and the latter being an incredibly poor Jean Michel Jarre rip off. It really is all very inept and I didn't enjoy playing Elite's Bombjack in the slightest.

Aarggh! What have Elite done? They've got the licence to a brilliant arcade game and completely ruined the conversion. For a start Bombjack himself has now become Fatjack - he's far too big, as are the various meanies, and consequently the playing area is considerably reduced. If there are meanies strolling along the top platform it's impossible to collect the bombs there - Fatjack is too obese to fly through the gap between the nasty's head and the top of the screen. The bombs are also huge and don't fizzle any more, they just flash. The original music has been removed and now an average version of a Jean Michel Jarre tune thumps away. After seeing the excellent Spectrum version, this is an immense disappointment; I'm sure the conversion could have been far, far, better than this.

Presentation 62%
Nothing special, very few options and little else.

Graphics 56%
Porky sprites are the order of the day, with average backdrops for desert.

Sound 63%
Fair, if annoying at times.

Hookability 60%
Easy enough to get into, but not overly addictive.

Lastability 46%
Too frustrating and not playable enough to maintain interest.

Value For Money 40%
You could get nearly 100 plays on the real thing for the same price, and it would be more fun than this version.

Overall 47%
A below average game and a disappointing arcade conversion.

A below average game and a disappointing arcade conversion.