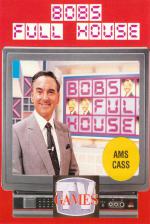 Game shows? I love 'em. And of the 546 currently shown on British TV. there's none better than Bob's Full House, as presided over by Mr Sincerity himself, Bob Monkhouse. "Certainly is, Marcus (eyebrow quivers), and I wonder (cheek twitches) if you can tell me (right eye pops out) what is the capital of Botswana (gleaming smile)? No, I'm afraid you're wallied..." And so on.

So why is it so good? Well. It doesn't have Henry Kelly in for a start, nor Nick Owen, nor Richard Countdown Whitely - yup, it's Bob himself. He's fast, he's slick, he's smoother than a whippet's jobby, and he asks those questions so quickly you don't have time to realise that most of the contestants have IQs so low it's fairly staggering that they can breathe and talk at the same time. So would you like the CD player or the all-in-one hoover-and-hi-fi-video...?

Domark, in its usual clever way, has decided that the world would be much poorer (as indeed would it) it it did not convert all this fun and jollity into a Speccy game for up to four players, and thus Bob's Full House has arrived encased in the usual double cassette box. Now at this stage you'll probably know whether you're going to be interested in this or not. Do you like quizzes? Can you spell 'Manchester United'? And do you really want to go on holiday in Malawi"?

Of course the prizes in this Speccy version of the game are purely theoretical, a point that has been stressed in the instructions, just in case some clever Trevor writes in and insists on actually going to Malawi at Domark's expense. But as quiz games go, this is pretty good - providing, that is, you play it with friends. Unlike Triv, this one's pretty dull for one player.

So. there are four of you with your fingers on the buzzers (well, certain buttons on the Speccy). First Bob asks you some quickfire quezzies to fill up your corners (remember, it's a bingo game and you've got a card of numbers to fill up) When one of you has all four corners lit up, you move to the second round, in which you each get questions in turn and seek to light your middle row (you get a choice of subjects for each number - you can also take other people's questions if they get them wrong). After that it's fingers on the buzzer time again as you try to fill up the rest of your card. If you get there first, bingo!

Or rather, you get to Bob's Golden Card and a chance to win a holiday. Here you have questions thrown at you with a time limit in which to answer them. Every time you get one right, you select a number on the card, behind which there's either that number's value in quiddies or a letter. Pull all the letters together in the time allowed and that's your holiday destination!

Well it's not, of course, which comes as something of a disappointment however often you play the game, but it's no less difficult for all that. The computer is genuinely random about where it puts the letters (as opposed, I've always suspected, to it's TV equivalent), so more often than not you'll get it wrong. Challenging stuff.

As indeed is the main gameplay.W hen you've buzzed your buzzer to answer a question, you don;t get a multiple choice of answers but just a number of dashes which show you how many letters the answer has. You then have to type in the answer, which assumes that you can spell reasonably well. Certainly this may be seen to discriminate against readers of other Speccy mags I could mention, but I'm sure YS fans will have no trouble.

Against the computer this is all a little on the easy side, but against your mates it's a giggle. My only real complaint is that questions do seem to crop up again and again - I've been asked whose backing group the Jordanaires were at least three times so far, which seems a little careless - but perhaps booster packs will eventually be made available (well, either that or they won't). but on the whole it's a well programmed and entertaining quiz game - certainly better than Triv.

Surprisingly entertaining and challenging computer version of the TV quiz show. Not perhaps a long laster, but great fun in multi-player mode.

Surprisingly entertaining and challenging computer version of the TV quiz show. Not perhaps a long laster, but great fun in multi-player mode.