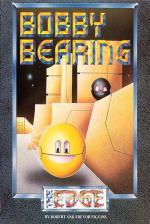 Here it is! Bobby Bearing, the game that we've all heard so much about. It has a feature called 'Curvispace 3D' which is supposed to be revolutionary. It is!!!

Bobby Bearing is fab, even its loading is weird and wonderful. First of all the computer finds 'Bobby' instead of 'Program: Bobby'. This is an old trick, but then the title page comes on, it is drawn in colour and in a sort of spiral fashion. Weird.

Then a scrolling message comes up and a counter counts down. Great stuff. Now to the actual game!

First of all, a nice ball bounces up and down as you select your method of control. As you do this, a picture scrolls left to right of the various joysticks/keyboard. What a nice touch. Now you press '0' and you're away. The next thing you notice is the 3D seems different to the old Ultimate type; in fact, I dare to say it's better.

Then Bobby trots out, and wow, does he roll brilliantly, yes folks, Bobby actually rolls. Perfect animation is definitely one of the good things about this game. Now what do you have to do? Well, it goes like this.

Bobby and his family, live in Technofear, a metal world which is a nice sort of place. But there were parts of the world which Bobby and his brothers were told never to go into, as this is where all the bad bearings went.

They had all been good until the arrival of their cousin. He dared the brothers to go ouot to the forbidden zones, and like complete mugs they accepted (Well boys will be boys, you know!)

Bobby, being the brave and handsome type, has to go in and rescue his brothers from the baddies, and if he feels like it, he might rescue his cousin as well!

Another great feature on Bobby is the fact that you don't fall off the edges of the screen, unlike Spindizzy, which gets annoying.

Bobby Bearing features great graphics, weird sound and brilliant gameplay. The Edge say it's going to be their biggest game yet. I believe them.

I love this game; it's so playable. If you don't buy this, throw your Spectrum away.

Totally brilliant! If you don't buy this, throw your Spectrum away.