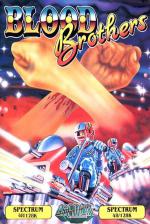 Blood Brothers is yet another spacey-shooty-ouch-that-hurty-collecty arcade adventure. And despite that fact it is flamin' excellent!

You play one member of a huge team (well, 2) and you have to penetrate each of the 3 modules of the game and collect all of the gems. Easy peasy. Not so. At the time of writing, I've yet to complete a module, and I've been playing it for more than a few hours.

Before you can start collecting all the gems and bits and bobs (more of those later), you have to atcherley get to your module, and to do this, you have to get through the dreaded 3-D flight on a jetbike through a slabs and wall sequence. You are viewed from behind and slightly above, looking over your own shoulder, so to speak. The walls and slabs start a short distance form you, with a large gap in a wall to start with. These soon rush toward you at an alarming rate, and when I say alarming, I mean these self-abusers are FAST! You have to steer your little bike around and over obstacles, looking for the entrance to the module which looks like a curtain of snow on a black background. Finding it is one thing, steering into it is another. It takes an extraordinary amount or time to get used to the road handling of your new machine.

Climbing and diving is no hassle, but the left and right steering is a right royal pain. The bike nips from left to right quite nattily, but inertia ensures that it doesn't change its course back to flying straight immediately. So you usually end up overshooting the hole in the wall you were aiming for and crash into the large expanse of brick next to it. Not that that has any drastic effect. All it does is send you back to the start of the sequence. No big deal if you crash early in the game, but it's when you're nearing the entrance of the module that you tend to cry with frustration. The worst bit about this sequence is that it costs you fuel. Once you run out of fuel you lose control of the bike, and inevitably crash into the next wall, which causes you to explode in a glorious manner.

The whole graphical feel of this section is unmatched by any other kind of 3-D flying thingy ever. The scrolling is amazingly smooth, and the enlargement of distant objects is done very well indeed. Just one minor bug. It's difficult in places to tell whether you have passed an object or not. Of course, the obvious solution to that is to blow it up. Yes, you can blow things up as well!

Once through this bit, you're into the module and it's platform time again. Praise the Lord (OOooooooh, yeeeeeaaaah!), this one is good. Controlling your little sprite with his little jet pack you have to fly around some caverns shooting lots of strange shaped things and collecting gems, extra bullets, extra fuel and extra laser power.

I can see Blood Brothers being very popular in the near future. It has everything a good game needs, good graphics, good sound, great playability, a good few hours of addictive gameplay, and all for under a tenner.

Well above average arcade-adventure with emphasis on the arcade. Climb aboard yer jetbike.

Everything a good game needs... Good graphics, good sound, great playability, a good few hours of addictive gameplay and all for under a tenner.