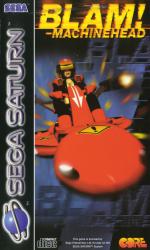 An all-new game from those wily Derbyshire demons.

Time was when you knew what you were doing with a game, just by the title. Games like Paperboy, or Burger Time, or Don't Pull spelled it out pretty clearly. Nowadays though, with all your trendy liberal games producers on the scene, these old-fashioned values are right out the window. No, now we get 'designer' names like Exhumed, which sounds like something by Damien Hirst. Why can't these so-called games programmers go back to calling their software things like "Worldwide Soccer '97"?

Anyway, we digress. What Mr. Smartypants Blam! Machinehead is about is this bloke called the Machinehead, who has inadvertently made himself a cybergod and destroyed practically the whole human race. You must fire a big nuclear missile at him and blam! You've saved everyone. Now what's that got to do with the title exactly?

Blast the heck out of everything. Guide some trains. Rescue a scientist. Operate a satellite. The usual.

The story of Blam! is pretty complex. Basically, the Machinehead bloke has infected the whole world with a self-replicating nanotechnology virus. You're Kimmy Stride, one of a team of scientists who've developed a vehicle kitted with a nuke (the Vorpal Blade) to destroy Machinehead, but you perverse assistance Orville has strapped you to the bomb and demands you navigate it personally to the Machinehead!

Maps in Blam! are for young sexy people who'd like to stay that way. As well as objectives, they highlight enemies and their bullets. Keep an eye on the cartography if you want to get anywhere.

Because the planet is now in the grip of a nano virus, things are a little squiffy. Thus the shape of the world is now subject to laws of Unreality. For example, a mountain which blocks your way can be flattened by finding an Unreality key that corresponds to a numbered Unreality station. With both combined, the mountain is removed. Those keys are very well protected, for your inconvenience.

With a prefix like Blam!, it's no surprise that ths game is absolutely crammed with heavy weapons. You start with Chain Gun and missiles. Pick up extra jollies on the way...

Along with the Unreality, there are also Reality Keys. Far from making the real unreal, they're quite boring. In fact, instead of Reality Keys, they could quite easily just be called Keys, because all they every do is open doors. Still, they're essential to your progress and shouldn't be mocked.

Machinehead certainly wins a prize for its groovy name, and probably scoops the Gratuitous Sexism of the Year award as well for its heroine.

Whilst Machinehead is definitely playable (once you've gotten used to the tricky controls), the format is similar to Core's Thunderhawk and Shellshock. However, Blam! is superbly executed. The graphics move smoothly, the enemies look absolutely ace and there's enough to keep both trigger finger and brain active.

Not an earth-shattering idea, maybe, but totally enjoyable... and the story is cool too.

In a time when most games have the consistency of spam, Core are still providing large wads of British beef for hardcore gamers. Blam will be lapped up by shoot-'em-up fans, who will appreciate the challenge.

It also looks excellent in motion: super-smooth. The control method is very tricky, but sophisticated and responsive once you've served an apprenticeship. Although the game idea veers towards the familiar, Blam does seem to offer something new. Much better than Shellshock, it should be said.

Graphics 92%
P. A lot of work has gone into designing the monsters.
N. The backgrounds are pretty boring.

Animation 91%
P. Some creatures have most amazingly realistic movement going - especially the spiders.
N. Some monsters hardly move at all.

Music 92%
P. There is some.
N. It's a bit dull, realy. No offence. It's not bad. But it could have been more atmospheric.

Effects 92%
P. Loads and loads of big bangs, along with different death yelps for every foe.

Playability 90% P. Once you've learned how to fly your craft, it's instinctive and full of death and depth. N. You may have played a game much like it before.

Lastability 89%
P. Loads and loads of missions, which get very hard indeed. Passwords limit the frustration though.
N. Don't know if you'd return to it once it's finished.

Overall 89%
Blam wouldn't impress your mates with its flashiness or originality, but it delivers solid gaming nourishment all the same.

Delivers solid gaming nourishment, although it won't impress your mates with its flashiness or originality.