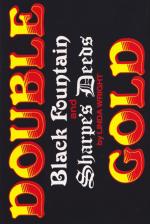 Adventure fans may remember a brief notice about Incentive's "Gold Medallion" series a while back. Intended as a showpiece for the best of the adventures created using Incentive's Graphic Adventure Creator utility, the first two releases (Winter Wonderland and Apache Gold) were very worthy and - let's face it - too expensive. £7.95 is really a bit much to pay for what is effectively a homebrew GAC game, however well it's been designed.

The Incentive people must have taken note, because now they're at it again, offering, this time, two games for the same price. Have they succeeded in offering us good value?

Well, the first point to make is that you're still paying almost four quid each for the two games. Bearing in mind that games like SubSunk are available for half this amount, that would still seem to be a bit on the steep side. But then little nuggets like SubSunk don't appear all that often, so perhaps Incentive will find the wallets coughing up the readies for Double Gold.

Both these games were created by one Linda Wright, whom Incentive describes as an "up-and-coming software author". There's no doubt that Linda has an eye for a good puzzle and she arranges the locations and problems of her games in such a way as to ensure that you really have to spend a lot of time to-ing and fro-ing before you can achieve your objectives.

In Black Fountain, your objective is to secure a certain crystal and in the process rid the world of a couple of undesirables. As Shardor, servant of the court of Loesp, you must sally forth across the countryside of Planet Areth and put the boot into Abhaldos, who is rumoured to have invented some hideous homebrew that now bubbles forth as the Black Fountain. In doing so, you must also locate your three brothers: Charmos, Fulisto and Tigros.

There's only one trouble with Black Fountain, and that is that I can't vouch for its lasting interest. I sat down and found the going a mite too easy for my liking. On the other hand, the way the game is laid out does demand that you cover almost every location (and there are about 100 of these), so, however easy the puzzles, finishing the game is quite an arduous task.

From the programming point of view, the game holds together well and has all the usual good (and bad) points of GAC. The pics are tidy, colourful, but repetitive, the response times occasionally a little slow, and the text well-written but necessarily rather brief. Nice points include being able to talk to most of the characters (though few will say anything of interest) who have attractively eccentric (and slightly Spanish-sounding) names.

Sharpe's Deeds is superficially quite different - you must hunt around a village in Somerset for twelve treasures and a set of deeds to prove your inheritance of Uncle Ferdinand's valuable estate.

Sharpe's Deeds isn't as easy to crack as Black Fountain, and I found myself becoming steadily more involved as the score mounted up. Playing it so soon after Black Fountain, however, alerted me to the many similarities of style - in particular the general rule that to get past any character, or to extract an object or information from them, all you have to do in most cases is give them something. After a while this becomes slightly aggravating - you just check your inventory and try GIVEing everything you've got until something clicks.

So, a couple of bijou little byte-oramas, but nothing worth mugging your local dealer for. I have some thoughts about the future role of GAC and other adventure utilities, but for these thou wilt have to look elsewhere on these illustrious pages.

Other Amstrad CPC464 Game Reviews By The Pilgrim

The pics are tidy, colourful, but repetitive, the response times occasionally a little slow, and the text well-written but necessarily rather brief.
Logout