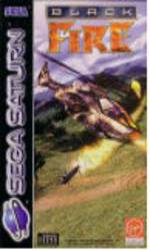 The best episodes of The X Files are always those where our intrepid heroes stumble upon bits of flying saucer that the US government has tucked away inside some remote warehouse.

But, whereas the FBI simply wave their flashlights about and get knocked unconscious, the protagonist in Black Fire had the good sense to pocket some souvenirs. The chap in question, one Commander Kane, does a runner with the gear and uses the technology to construct some pretty whacko weaponry. Worse than that, it seems he's invited some mates over from outer space to join the party. The only thing standing between this nutter and world domination is you in your super-duper helicopter Black Fire. What this game basically comes down to is eliminating anything that moves in new and inventive ways using a staggering array of 21st century weaponry. A brave and challenging concept, we know, but like all dirty jobs, someone's got to do it.

There are five main levels in the campaign against Commander Kane and his 'Sword of Gideon' forces. Each level is divided into three separate missions, with a few bonus levels thrown in for good measure.

The action takes you to such diverse locations as Alaska and the Rocky Mountains of Colorado - the targets include a crude oil refinery, a heliport and an oil rig. Kane's forces are well armed and boast considerable manpower - be prepared for anything from Cruise missiles to suicide bombers.

This is a fair attempt at a familiar scenario - anyone who's played Hi-Octane or Magic Carpet will recognise the looming horizon lines that seem to be a trademark of this type of game. Black Fire seems to suffer more obviously than most.

Elsewhere this is fairly straightforward, if unsophisticated, stuff that suffers from being far too challenging for its own good. If you're ready to devote yourself to an action-intensive copter game then this is worth looking at - but think about Thunderhawk 2 first.

This game is different to the point of "you're 'aving a laugh mate". But it's not funny when you're mobbed by a thousand flying sprites the minute you start a level.

The simply shaded landscape and borderline jerky screen update are all pretty irrelevent anyway because, as Marcus rightly pointed out, we've already *got* a brilliant helicopter game at home and it's called Thunderhawk 2. So it's bedtime for Black Fire, really.

Animation 72%
Blocky explosions but everything moves at a pace.

Music 75%
Sort of well 'ard gung-ho type stuff that does the business.

Lastability 68%
There are plenty of levels, but most are too difficult.