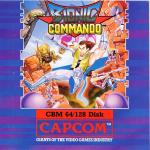 Whether the result of inexperienced programmers, or simply asking too much from the limited hardware, the Commodore 64 has its fair share of abysmal arcade conversions.

Did you know that there are two versions of Bionic Commando for the Commodore 64? There's the US conversion, handled by Pacific Dataworks, which is a complete travesty and one of the worst games in the C64 library. And then there's Software Creations' European conversion, put together by programmer Stephen Ruddy and artist Andrew Threlfall. In stark contrast, the EU version by Capcom is one of the C64's finest run-and-gun arcade classics. Not only did they manage to cram in all of the original levels, enemies and content from the arcade, the game just feels right.

The iconic rope-swinging action, climbing and grappling mechanics are implemented remarkably well, and the game runs at a decent lick too, arguably better than Software Creations own (lacklustre) Amiga conversion!

Sure, there are a couple of bugs with scenery collision in places, but it's a shining example of an arcade conversion done right.

A special mention must go to composer Tim Follin's incredible music, which expands on the original arcade tunes to a considerable extent. Follin is perhaps one of the few composers to rival legendary SID composer Rob Hubbard in terms of technical and artistic expertise, and his compositions for Bionic Commando are among the best to grace the C64.