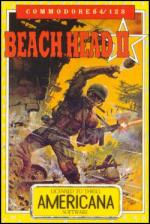 This classic Sizzler was first reviewed way back in Issue 4 and was awarded 90%. Now US Gold have given it a new lease of life by releasing it on their budget label, Americana.

The plot concerns a Dictator who has captured allied soldiers and is holding them prisoner on his remote island. A crack squad of commandos is sent to their rescue.

Beach Head II is played three ways: one player takes the role of either the Dictator or leader of the assault team, or two players battle it out simultaneously in a head-to-head.

The action is played over four independently loaded scenes. The first is 'Attack', where the commando team is parachuted in by helicopter. The Dictator controls a machine gun and blasts the soldiers as they rush down the screen. Next comes 'Rescue' where the Dictator's forces are used to kill captives before they escape the prison.

If the prisoners are rescued, they're flown by helicopter up a 3D vertically scrolling screen. The Dictator's army is out in force again, this time to blow the 'chopper out of the sky before it reaches safety. Finally, there's the thrilling knife fight between the Dictator and the leader of the commando team, and there can be only one survivor...

Beach Head II is simply superb, and boasts some lovely graphics and a huge range of sampled voices. The gameplay is very bloody, but extremely enjoyable, and at this price it's a steal.

Simply superb... Boasts some lovely graphics and a huge range of sampled voices.