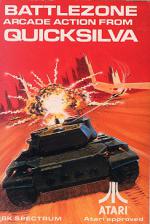 One of the arcade greats this, and in an Atari-approved version. Battlezone is probably the earliest attempt at a game with a true 3D feel, and in the arcade it succeeded rather well.

We find ourselves in charge of a tank trundling around a barren desert. In the far distance are a range of mountains which sadly can never be reached. Enigmatic solids: cubes, pyramids and oblong boxes are strewn around. This unprepossessing ground is contested by enemy tanks, flying saucers, missiles, and other machines. It being essential to zap them before they scrap metal out of you, you are equipped with a radar scope to warn you of enemies behind and to the side, and a forward gun sight which changes shape when the enemy is bracketed.

Enemy machines are drawn in wire graphics, so everything has a ghostly transparency, which adds to the eerie atmosphere. This version is much jerkier than the arcade model, but it's a tricky bit of programming. The big let down is the total lack of documentation. It didn't take me long to figure out how to turn the tank, but forward and backward motion took a little longer.

In fact, the controls are rather like those on a real tank. Q and P make the left and right tracks run forward and Z and Space backward, so you turn by running one track forwards while the other is stopped or running backwards. The zero key fires the gun.

Very playable once you know how, but really Quicksilva, we're not all telepathic, you know.

This home computer version is much jerkier than the arcade model, but it's a great bit of programming.