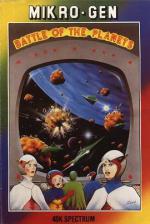 In a nutshell, you have a ship that must defend five planets against the baddie. The baddie is Zoltar, and you are G-Force, and as this is the only connection with Battle Of The Planets, apart from the title music, I shall review this game as if it was a real game, and not just another TV/Film tie in.

You can warp from planet to planet by firing into a hyperspace gate and selecting your destination. Each planet system has one gate, one planet (generally near each other) and what seems to be one (or possibly two) type(s) of enemy ship. The enemy ship are different for each planet in shape, speed and manoeuvrability.

After a time the landers will drop down to a planet and start a genocidal campaign against the populace, if they get exterminated, then you die, so it is in your interests to keep them alive.

That's the plot (similar to Defender/Stargate in some way), quite simple? Now comes the good bit. All of this is played out in 3D vector graphic battling, and at such high speed and smoothness of animation that it makes (the rather jerky) Spectrum Elite look a bit tardy.

You are armed with lasers and missiles, and have a range of instruments that are selected with little icons that are in a corner of the screen. The left of the screen prints the results of these icons, in extremely detailed bar charts and pictographic representations.

Repairs, refuelling, and re-arming can be done at planets (that you can actually land on! Very un-Elite-like). On these planets, you can fly to the repair/refuel stations and also shoot up any landers that have found their way to the surface.

Starting to play the game is a bit odd, and it takes a while to get used to the 'navigational aid' that tells you where everything is approaching from. One problem that I found was that the joystick is upside-down! Pulling the stick back makes you dive and pushing it forward makes it climb!

I remedied this on a standard Atari joystick by undoing the four screws on the base, locating the wires that are connected to the circuit board inside and unclip the blue and brown ones, swap these and all should be well. This process can be reversed as all the wires are plugged rather than soldered, so normal service can be resumed as soon as possible, though you'll be playing this game for so long that it is worth having a doctored joystick especially for it (I have!).

A brilliant game, well worth having.

A brilliant game, well worth having although do note that the joystick up and down controls are upside-down.