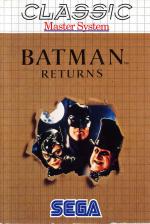 Holy inevitability comic fans, if it isn't the return of one of the world's greatest superheroes and his expected flight onto another lucky console. Once more, the distinctive shadow of his most revered cape and horned head make their appearance, this time on the Master System, and find their secrets under scrutiny from the hungry masses.

Batman is directed through the many platform locations and defends himself against the Penguin's Red Triangle Circus Gang in the name of peace and justice for all. Five stages of possible high-flying heroism or humiliation await.

Batman Returns is your archetypical platform rescue mission within the confines of an architecturally magnificent but deranged Gotham City. Just as the film of the same name is concerned with the destruction of Batman's adversary, Penguin, and the evil bird's assistant Catwoman so the game follows similar lines - pitting the determined Dark Knight against their rancid plans whilst leaving a similarly-minded games-player at his command.

Batman Returns, the Master System game, is licensed from the film of the same name. There are currently two more versions of the game available for the Game Gear and Megadrive.

Guide Batman over and under, up and around the streets and sewers at Gotham city in its platformed state. Collect power-ups to increase the range and power of his Baterangs.

Either the citizens of Gotham City are failing to pay their poll tax or the metropolis' government are spending the cash elsewhere. Whatever the situation there isn't a street in the place that isn't pocketed with pot holes or completely unsurpassable because there's absolutely nothing left - not a trace! This problem is of no concern to Batman, of course!

Rather than sit staring into the gloom of these frequent pits, swinging his black boots and worrying how on earth he is expected to give chase with this in his way, he uses his grappling hook. With this he is able to deliver himself to the further reaches of any pitfall-like problems.

There are three items that Batman hunts down to improve his chances. These are the red, yellow and grey bat icons. When Batman strikes a floating bat with either a Batarang or his grappling hook, the deceased animal drops such an icon for Batman's use.

Red/Orange: Provides Batman with a full power-up and an extra credit.

Grey: Extends the range of the batarang.

Yellow: Ensures a speedy return of the batarang once thrown.

Contrary to his public image Batman is more than a little susceptible to damage. In fact, his composure is completely and utterly ruined at even the slightest of touches. One tap from the finger of a bomb-tossing female and he crumples into a heap, a mere brush of the shoulders with a clown and he just keels over and dies.

Surely this is not what we have been led to believe! It's a scandal! A sham! An outrage, by George! [All right, calm down! - Ed]

I am astonished at how badly the Master System rendition of Batman Returns fairs against its Game Gear partner! Basically it follows the same design but, rather than benefit from its new surroundings, the game suffers terribly from flickery sprites and sub-standard presentation all round.

The weapon select screen of the Game Gear version is absent and with it go the cool special attacks and their relevant animated sequences. One particularly impressive section of the Game Gear cart, where Gotham City is plagued by a blizzard in the early stages of the game, is yet another feature that fails to make it into this conversion.

Consequently, Batman is left to battle the first, fire-breathing boss against a black, empty space - as opposed to a snowy dead-end street.

I'm sure you can imagine how poor this all looks. Because which, all the bosses' attack patterns are less complex and therefore not as taxing. It is also consistently depressing to find that our prospective hero falls to just the slightest of blows - dead!

All the extra 1-UPs available in the world fail to soothe the frustration as Gotham City is transformed to Dohsville Arizona in a few short steps.

With the game being such a disappointment, it wouldn't surprise me if the Sega warehouses receive many Batman returns!

Basically, I'm a little shocked at the sadness that is Master System Batman Returns. I had expected something very similar to the Game Gear version which was excellent, if a little easy.

This looks more like a very early pre-production version of the Game Gear cart - basically it's the same, without the excellent fine tuning, without the decent graphical effects, without the same level of fab playability. What really frustrated me was that Batman died on first contact with any enemy - this just made the game especially frustrating for me.

It's a shame really. If the Master System version had received the same level of care and attention as the Game Gear cart, this would have had a far more welcome reception. As it is, I can't help but feel disappointed.

Presentation 54%
P. Each of the five stages are prefixed by a choice of route presentation screen.
N. Elsewhere the presentation is either awful or simply absent.

Sound 79%
P. The music suits the nature of the game.
N. Unfortunately the sounds reflect the gameplay, i.e. poot.

Playability 74%
P. There's no time limit, giving Batman time to waste many minutes swinging about like a shoddily-drawn baboon. Wiping out his enemies with the batarang is quite satisfying too.
N. Batman responds to instructions in much the same way and his one-hit lifeline is both unfeasible and annoying!

Lastability 68%
N. Worse than average graphics and presentation coupled with the substandard gameplay are an instant turn-off.

Overall 70%
In what appears as a rushed effort, Batman's return fails on this particular console, proving itself inferior to its Megadrive and Game Gear team members. In all, a real disappointment.

This Master System effort proves itself inferior to its Megadrive and Game Gear team members. In all, a real disappointment.