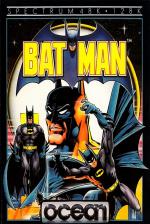 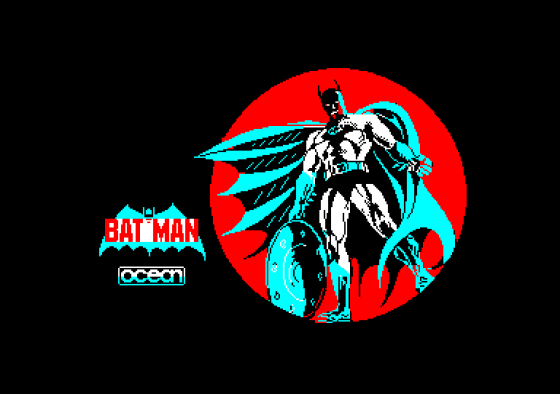 "Holy smoking Spectrums, Batman! They've gone and turned us into a computer game!"

"Don't worry, Robin, old chum. It's probably just all a dastardly plot cooked up by our arch-enemy The Joker! Just close your eyes and perhaps all these people will go away!"

Sorry Batman - but you're not going to get much rest once the hordes of Spectrum and Amstrad gamesters get their hands on a copy of this truly excellent game. 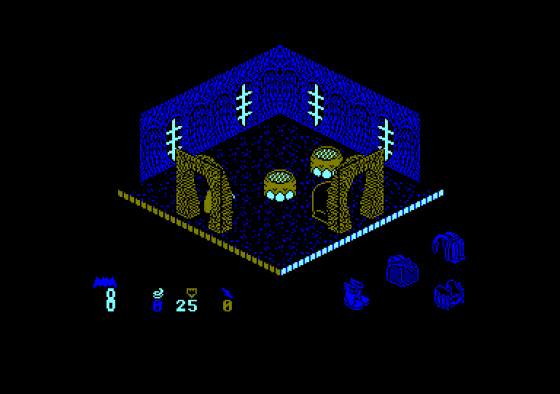 Jon Ritman, of Bear Bovver and Match Day fame, assisted by Bernie Drummond, has come up with a game that's going to leap to the top of the charts with one mighty bound.

Batman makes Superman look like a real wimp thanks to this colourful, fun-packed arcade adventure. OK, once you start playing you'll soon realise you are dealing with a game that's destined to become an all-time classic.

Let's take a look at the plot - which is worthy of any of the Batman TV shows. 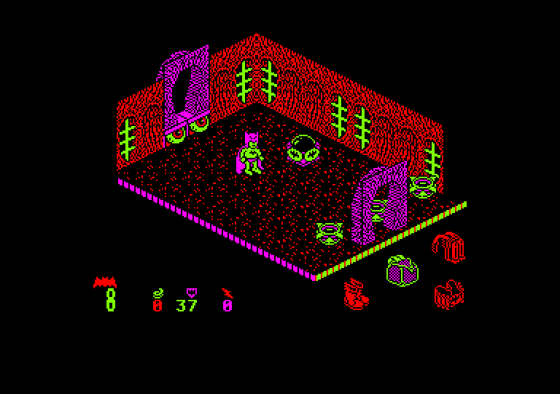 The Caped Crusader has got a problem. Robin has been kidnapped by some dastardly villain - and Batman must rescue the Boy Wonder before he suffers a fate worse than death. Being forced to play First Star's Superman game!

Batman rushes to his recently enlarged Bat-cave, only to find that Arthur the butler has been cleaning up and all the special Bat-gear he needs has been scattered around the different rooms of the cave.

This it tougher than it sounds because each item is hidden in a different room and protected by a nasty Bat-guardian who seems to have forgotten just who Batman is! In any event, these guards aren't going to allow Batman to get his belongings together very easily.

It also appears you need to collect these items in a specific order. One item helps you get another more easily. But we'll leave you to work that out.

Once Batman has collected all these Bat-bits he has to search out some more. Bits of the Bat-craft which he recently serviced and forgot to put back together. Who's a silly little Bat-boy then?

Once that's done, Batman can go off in search of the Boy Wonder! Holy broken joysticks, Batman!

Scattered around the Bat-cave are various energisers which Batman must collect. These give him extra energy, make him move faster, jump higher, give him the power to use a shield, give extra lives, etc. But learn to spot the neutralisers which strip Batman of all his hard-earned extra powers.

Batman will also come across reincarnation stones scattered around. All you have to do is touch it and it will store the state of the game. This allows you to restart the game at this point from the main menu should you be unlucky enough to lose all your Bat-lives. Useful!

The main menu allows you to select the normal stuff like joysticks or control keys but also things like the volume of the music, sensitivity of the controls you've chosen. Why don't all games offer these useful options?

The graphics are excellent in both versions although the Amstrad game look much prettier thanks to the machine's bigger range of colours.

The Batman character is - how can we put it? - just perfect. He looks just right in his cloak which billows out behind him as he walks and flips up as he jumps about. If you leave him alone too long he looks disgustedly out of the screen at you, puts his hand on his hip and taps his foot impatiently - just like Rockford in Boulderdash.

The only thing missing are the Zap!, Pow!, Kerrrunch! bubbles that appeared whenever Batman battled his enemies with his KO punch. Perhaps Jon will remember that for the next Bat-game.

Fly down to your local Bat-shop and demand a copy of the game. You must be batty if you don't!

Just perfect. Fly down to your local Bat-shop and demand a copy of the game.